Carmona’s trainer, Alejandro Galindo, decided he had enough following the seventh round of their 12-round, 115-pound title fight at Save Mart Center in Fresno, California. He had been knocked down four times in the first five rounds.

England’s Yafai remained undefeated (24-0, 15 KOs) and made the third defense of his WBA world super flyweight title on the Jerwin Ancajas-Jonas Sultan undercard. Mexico’s Carmona has lost four of his past five fights (21-6-5, 9 KOs). 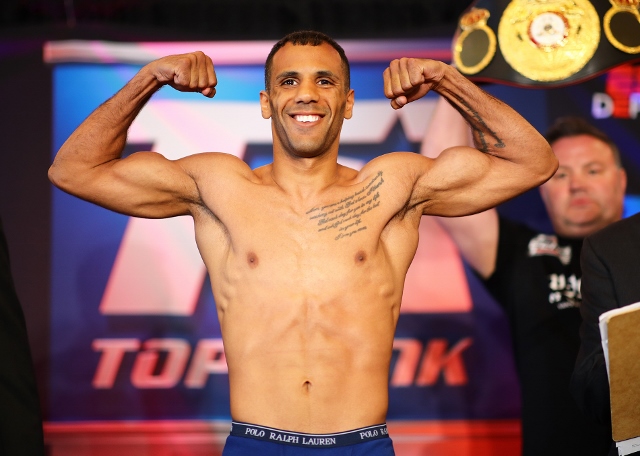 Yafai could’ve lost his championship if Carmona upset him, but Carmona couldn’t have won it. Carmona came in 3½ pounds over the division’s 115-pound limit at the weigh-in Friday and thus wasn’t eligible to win the title.

“It was brilliant for the fans at home,” Yafai said following his victory. “I’m sure they enjoyed it. Quite a way to start in the U.S. debut. You know, putting on a show like that, being hurt in the first round, getting buzzed, re-adjusting, coming back and breaking a very, very tough Mexican apart.”

Carmona was knocked down four times in the first five rounds, though that didn’t stop him from making the sixth and seventh rounds reasonably competitive. Galindo still didn’t like what he saw from a battered Carmona once he sat on his stool following the seventh round.

Yafai dropped Carmona twice during the fifth round, his third and fourth knockdowns of the fight.

Carmona went down with 45 seconds left in the fifth, after Yafai connected with a three-punch combination. Carmona made it to his feet again.

Yafai dropped him again with what Carmona considered another low blow. Referee Raul Caiz Sr. counted that knockdown, but deducted a point from Yafai for hitting Carmona with another left hand when Carmona was down.

Yafai officially scored his second knockdown of the fight 45 seconds into the fourth round. A replay showed, though, that Yafai’s left hand landed below Carmona’s belt before he went down.

Carmona complained to Caiz, but it didn’t do him any good. He landed a few right hands later in the fourth, yet also absorbed a combination of left hooks from Yafai to his body and head.

Carmona and Yafai traded vicious body shots during the third round, in which each fighter threw a lot of punches, mostly from close distances.

Yafai’s best punch of the second round was a left uppercut that snapped back Carmona’s head. The champion followed up that shot by landing an overhand right.

Yafai clipped Carmona with a left hook that knocked him down one minute and five seconds into the fight. Sensing Carmona was hurt badly once he got up, Yafai went after him.

Carmona came back and landed two left hooks, the second of which knocked Yafai off balance. That kept Yafai from hurting him again in that round.

[QUOTE=Milkdogg;18808350]What's that got to do with boxing you low self-esteem motherf*cker. Look like Richard Gere do you? Married? Nope on both fronts[/QUOTE] Yes on both accounts you fkin loser lol. Im also a successful businessman. I bet you are an…

[QUOTE=FinitoxDinamita;18808342]Make way Mikey Garcia... the new ugliest boxer has arrived. The Horse Yafai!![/QUOTE] What's that got to do with boxing you low self-esteem motherf*cker. Look like Richard Gere do you? Married? Nope on both fronts