In a night focused on prospects, the best, and most brief, impression was left in the main event on Friday night at the Pechanga Resort and Casino in Temecula, California. 23-year old Jr. middleweight Justin DeLoach (17-1, 9 KO), 151 ¾, of Augusta, Georgia, needed just two rounds to dispose of 26-year old Chris Pearson (14-2, 10 KO), 152 ¾, of Trotwood, Ohio. It was Pearson’s second loss in his last three fights while DeLoach makes it seven straight after a stoppage loss to Cesar Villa in early 2015.

The referee was Jack Reiss.

DeLoach exploded in the second, hurting Pearson near the ropes and keeping him on the defensive. Pearson held his guard high and tried to hold but could never really get his bearings. DeLOach wisely kept his free hand working when held and was able to drop Pearson two times. After the second knockdown, an out of sorts Pearson crawled across the ring a bit and raised partly but never made an affirmative move to get to his feet. The ten count tolled at 2:30 of round two.

The quick turn in Pearson’s career comes after a stellar amateur run that saw him win a national title in the US. DeLoach will look to extend his winning streak as he inches towards contention in the deeply talent Jr. middleweight field. 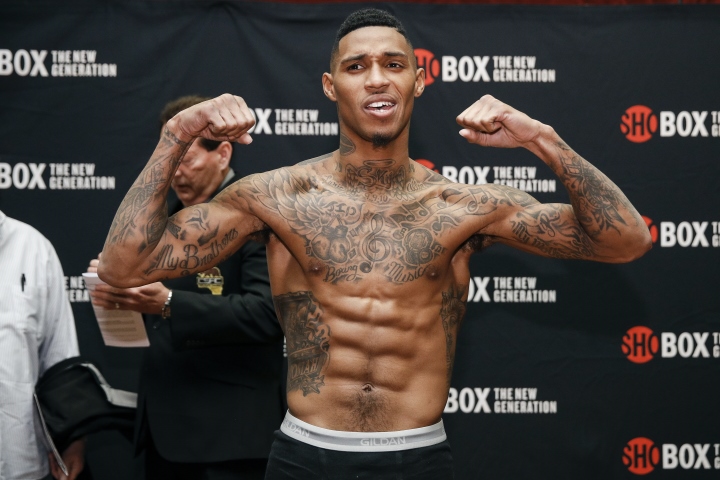 23-year old lightweight prospect Saul Rodriguez (21-0-1, 15 KO), 133 ¾, of Riverside, California, banked ten valuable rounds in his fledgling career and nearly walked away with his first loss, surviving a fifth round knockdown to secure a split decision over 29-year old Oscar Bravo (22-7, 10 KO), 132 ¾, of Santiago, Chile. It was Bravo’s fourth loss in five fights but he kept it close throughout and had a case for winning.

Rodriguez started okay, and rebounded strong from the knockdown, but never seemed able to hurt and deter the aggressive Bravo. While Rodriguez would throw more consistently, it often appeared Bravo’s shots were the more impactful. The scores came in with each man picking up a 95-94 card, a reasonable score for either. The deciding 97-92 card for Rodriguez seemed overly generous.

The referee was Edward Hernandez Sr.

The televised action began in the cruiserweight division.

In a battle of undefeated prospects, 27-year old Andrew Tabiti (14-0, 12 KO), 196 ¼, of Las Vegas, Nevada, proved to be the sounder future investment with a one-sided six round domination of 34-year old Quantis Graves (11-1-2, 4 KO), 198 ¾, of Beaumont, Texas. Tabiti bloodied the nose of Graves early and kept it bleeding while outboxing and outpunching his man from bell to bell.

A right hand to the body dropped Graves in the sixth and Graves elected not to go on after the round. The fight was originally scheduled for ten rounds. The referee was Ray Corona.

The card was televised in the US on Showtime as part of its ShoBox series, promoted by Mayweather Promotions.

Good win for DeLoach! Would love to see Justin DeLoach vs. J-Rock Williams next!

That little boy Rodriquez was manhandled and given a gift. Looks like they score punches to the gloves now with Rodriguez getting a gift. And Bravo's body shots were ignored by the judges. Just like I have said countless times...they…

what was pearson doing crawling lmfao... Delouch was was too quick on the trigger for pearson.

DeLoach stopping Pearson was a given. I'm surprised he wasnt a 10-1 favorite seeing as a Lightweight floored Pearson. This is what you call an easy money bet. Pearson was beat by a guy who is not as good as…

[QUOTE=cotto#1p4p;17451698]I read Neno got dropped and got a gift W.[/QUOTE] IF THE CANELOS AND CHAVEZ FAMILY AND OSCAR CAN GET MULTIPLE GIFT DECISIONS WHY CANT NENO GET ONE..... #BOXING :boxing: