Julio Cesar Martinez is once again faced with compromised plans for his next scheduled fight.

A new opponent will need to be secured for the reigning WBC flyweight titlist, who is due to appear on the undercard of the October 23 DAZN show airing live from Mexico City. Martinez’s originally scheduled opponent, Maximino Flores was forced to withdraw after testing positive for COVID-19, multiple sources informed BoxingScene.com on Thursday.

News of the development was first reported by ESPN Deportes’ Salavador ‘Chava’ Rodriguez.

The news is obviously a letdown for Martinez (16-1, 12KOs) who aims to make his second flyweight title defense. The squat brawler from Mexico City was previously slated to defend versus Puerto Rico’s McWilliams Arroyo on August 15 in Tulsa, Oklahoma, only to have to withdraw due to non-COVID related illness. 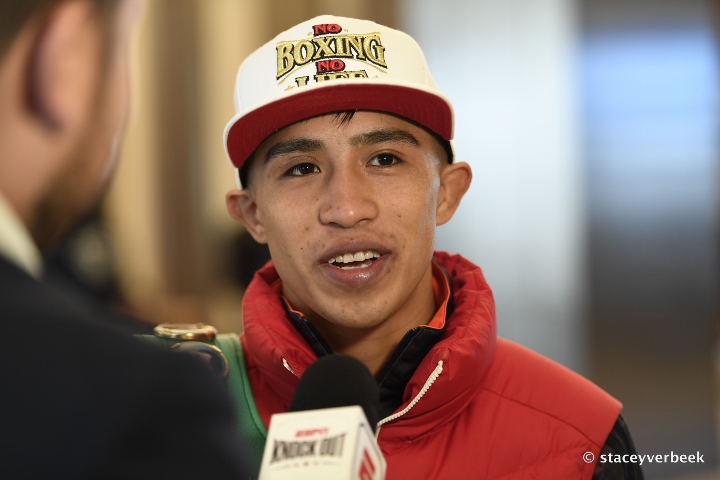 Barely two months later, he is now left without an opponent for the moment. Sources inform BoxingScene.com that such a process to secure a replacement foe is currently underway, although still very much up in the air as this goes to publish.

Flores (25-4-2, 17KOs) aimed to add the WBC strap to his current hold on the IBO title, which he won in a technical decision win over Carlo Caesar Peñalosa last August on the road in the Philippines. That dream is now on hold given his current medical status.

Martinez claimed a flyweight title with a 9th round stoppage of Cristofer Rosales last December in Phoenix, Arizona. The win helped cap a banner year for his team, namely head coach Eddy Reynoso, who was named 2019 Trainer of the Year for his work with Martinez, Saul ‘Canelo’ Alvarez, Ryan Garcia and Oscar Valdez.

For Martinez, it was sweet success the second time around, winning the same belt that was literally taken from him in a knockout win-turned No Contest versus Charlie Edwards last August. An originally ruled 3rd round knockout was overturned due to Edwards being hit while down on a knee from an official knockdown. One title defense has followed since his win over Rosales, scoring a competitive but clear decision over unbeaten Jay Harris in their 12-round scorcher this past February in Frisco, Texas.

His second title defense will depend on how efficiently the team at Zanfer Promotions can navigate during a pandemic.

Martinez’s scheduled bout comes in supporting capacity to a pair of junior bantamweight fights, one of which could also be in jeopardy.

For now, the one that remains fully intact and free of rumors involves four-division and reigning 115-pound titlist Roman ‘Chocolatito’ Gonzalez. The modern-day legendary boxer from Managua, Nicaragua makes the first defense of his second junior bantamweight title reign versus Los Cabos’ Israel Gonzalez (25-3, 11KOs; no relation) in the evening’s chief support.

Juan Francisco Estrada (40-3, 27KOs) is scheduled to defend his lineal junior bantamweight championship versus former titlist Carlos Cuadras (39-3-1, 27KOs), whom he defeated in a non-title fight in September 2017. The same report from ESPN Deportes indicates that the bout is in trouble due to Cuadras testing positive for COVID, although BoxingScene’s sources insist the fight remains intact until otherwise notified.

Whether in present form or versus a replacement opponent, Estrada will make the second defense of the 115-pound crown. The 30-year old from Hermosillo, Mexico claimed in a majority decision win over Srisaket Sor Rungvisai in their thrilling rematch last April to become a two-division champion. Estrada previously reigned as a unified flyweight titlist before moving up to junior bantamweight in 2016.