Julio Cesar Martinez has set his sights on unification battles in 2021 before moving to Super-Flyweight as the WBC World Flyweight king meets Moises Calleros tonight at TV Azteca Studios in Mexico City, Mexico, live on DAZN.

Martinez (16-1 12 KOs) fights for the second time as WBC king following his first defense against Welshman Jay Harris in Dallas in February having won the vacant strap with a ninth round KO in a thrilling shootout with former champion Cristofer Rosales in December.

Calleros (33-9-1 17 KOs) failed to make weight for the battle so cannot win the strap, but Martinez is still looking to impress and reignite the momentum he had going following his World title wins. 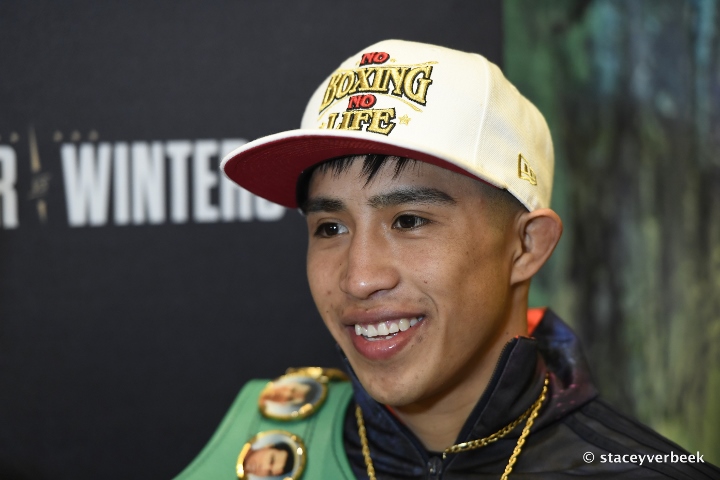 The 25 year old is eyeing battles with IBF champion Moruti Mthalane and WBA ruler Artem Dalakian in unification battles but admits that the lure of big showdowns with tonight’s fellow World title defenders Juan Francisco Estrada and Roman ‘Chocolatito’ Gonzalez could see him move to Super-Flyweight later in 2021.

“I would like to go up against Mthalane,” said Martinez. “There’s him, there’s Dalakian. Honestly, I will go up against anyone, anywhere. I’m ready to have my hand raised first thanks to God, because we’re going in with everything other than fear. We won’t disappoint, it will a great fight.

“I want to stay here a little while to get two or three more belts. But I want the biggest fights, so I’d want El Gallo Estrada and Chocolatito, big fights. But whatever comes. Maybe I have six more months and I’ll move up to Super-Flyweight before they run away from me.

“More than anything, I’m very happy and very excited to be fighting in my homeland. I’m just happy that, after my fight, I can go be with my family, with my wife, with my kids.

“I spent my whole training camp at the Centro Ceremonial Otomi. I’ve always said that I prepare with everything other than fear. I don’t train at 100 per cent. I train at 1000 per cent with my training Mauricio Aceves. We fight with whoever, wherever and we always give 100 per cent.

“We’re really happy that Eddy Reynoso and the rest of the guys have accepted us into that group. In that stable you have guys like Canelo, Andy Ruiz Jr, Ryan Garcia, Oscar Valdez ‘El Pantera’ Luiz Nery, they’re really all great friends. It’s really great motivation, anything is possible and we’re going into this fight with everything and for the fights to come, thank God.

Don't do that kid, 115 is full of Sharks..... You will be picked apart by better boxers and at 115 stronger guys will K.O you with your style.