Julian Williams wouldn’t divulge too much about the specific weaknesses in Jarrett Hurd that he was able to exploit last month.

Williams figures it’s possible they’ll fight again at some point, thus he doesn’t want Hurd to know his strategic secrets. If they were to meet a second time, Williams is confident he’ll defeat Hurd convincingly again. 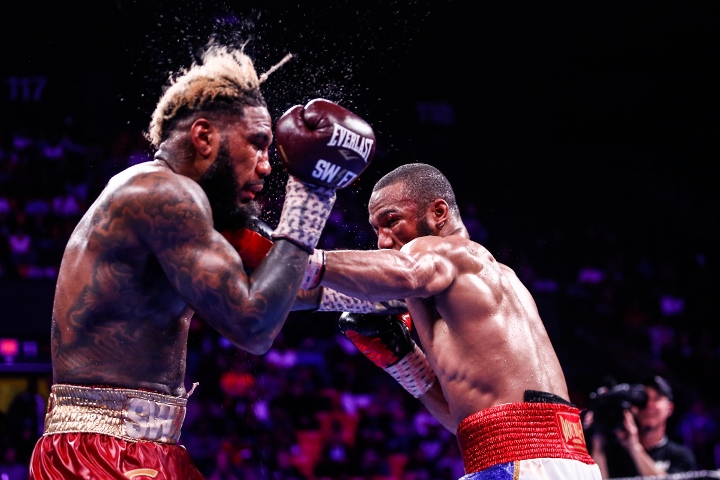 The previously undefeated Hurd was a 6-1 favorite entering his title fight with Williams on May 11 at EagleBank Arena in Fairfax, Virginia. Philadelphia’s Williams (27-1-1, 16 KOs, 1 NC) boxed brilliantly, both from the outside and inside, and won a 12-round unanimous decision to take the IBF, IBO and WBA 154-pound championships from Hurd (23-1, 16 KOs), of Accokeek, Maryland.

Williams, who dropped Hurd during the second round, won by scores of 116-111, 115-112 and 115-112. Williams admitted Wednesday night that while reviewing the fight he had a tough time finding five rounds to give to Hurd, who won five rounds on two scorecards and four rounds on the other card.

The 29-year-old Williams wouldn’t give away too much about the game plan that enabled him to produce the biggest win of his career.

“Well, I don’t wanna dig in too much into what I seen because we might have to do a rematch at some point in time,” Williams told host Kate Abdo and analysts Shawn Porter and Abner Mares. “But I will say that he has a lot of deficiencies and holes in his game that I noticed, not just when I watched tape, but I noticed when I seen him fight for the first time, which was a couple of years ago. I think he’s a really good fighter. But not to take nothing away from him, but just skills are not his strong point. His strong point is his mentality and what he has on the inside.”

[QUOTE=Loque-san;19810901]I don't know why there should be an immediate rematch. J-Rock absolutely battered Hurd all night in a one-sided fight. Hurd isn't some longtime kingpin of the division that if beaten deserves a rematch for his body of work alone.…

I don't know why there should be an immediate rematch. J-Rock absolutely battered Hurd all night in a one-sided fight. Hurd isn't some longtime kingpin of the division that if beaten deserves a rematch for his body of work alone.…

Hurd would not be able to beat jrock unless Hurd makes some serious changes to his game....this not getting started until the 6th round mess needs to stop. Also Hurd needs a new trainer who is going to have to…

[QUOTE=Bigchip;19810715]Finally someone who uses the comma before the last subject! Sir, I salute you![/QUOTE] Speling and Grammmor nazi