Julian Williams is on the short list as a top candidate for fight of the year and upset of the year following his unanimous decision win over Jarrett Hurd in May for the WBA, IBF and IBO super welterweigtht titles.

A rematch was imminent on Dec. 14 but Hurd suddenly opted to take his career in a different direction last month when he pulled out of the fight during negotiations. Williams (27-1-1, 16 KOs) is now stuck contemplating his next opponent, weight class and career move.

“I’m moving forward. We’re not fighting,” Williams told BoxingScene.com. “Everybody keeps asking me like I’m the one who pulled out of the fight. You have to ask him. I don’t necessarily care. It’s none of my business. I don’t hold anything against him. He fought like a champion, and he is a champion. I wish him the best.

“I want to get back in the ring by the end of the year and fight the best available guys. I don’t like the talk of a ‘stay-busy fight.’ That gives the perception that it’s an easy fight, and no fight is easy. I need to fight a top-10 guy. I can’t fight Joe Shmoe. There is no such thing as a tune-up fight for me anymore.” 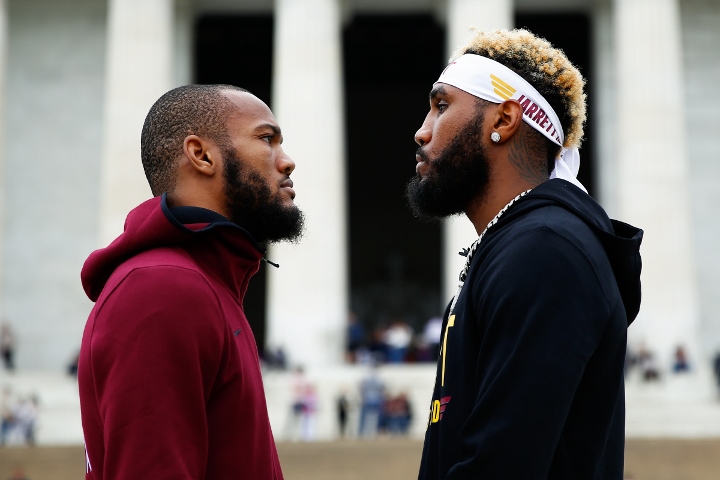 Williams, a PBC fighter, is waiting for the rematch between WBC champion Tony Harrison and Jermell Charlo to be scheduled and unfold so he can challenge the winner and unify the 154-pound division. He’s also considering a move to 160 once he’s done defending his titles.

Before he moves to middleweight, there’s the likes of boogeyman Erislandy Lara lurking in the distance at 154 as the pieces to the puzzle fall in place. Austin Trout, who is 1-3-1 in his last five fights, is also looking to give it one last hurrah at age 34. Both fighters are inked to PBC and making a match with Williams could be done overnight should Williams be inclined for either challenge.

“Whoever ends up with the WBC belt, that’s the guy I want to fight. Charlo would be the bigger fight, also because his brother beat me. But I’m not going to sit around and wait,” said Williams.

“Being a champion has definitely changed the way I’ve been perceived. I was looked at as a decent, fringe contender who had really good skills but no chin and gas tank. But I’m glad I changed that perception. I’m the best in the world now.”

[QUOTE=Adamsc151;20111669]That's a match-up I'd watch at any safe weight. The Charlo's are not exactly shrimps either, they could easily be looked at as 168 fighters themselves. For the sake of their long term health, boxers should have to compete closer…

[QUOTE=I'm Widdit!;20109743]Haymon and Breadman don’t want to open a can of worms regarding Hurd and the VADA that Jrock cried about.[/QUOTE] [QUOTE=Califire209;20109746]Jarred Hurd they didn't want to undergo extra-long Vada testing, that's why he pulled out. Hurd beat the man…