Julian Williams: I Have Rematch Clause, It Will Be Immediate!

One this is for sure, Williams plans to exercise an immediate rematch clause to get Rosario back in the ring as soon a possible. The date of the second fight could very well land in the summer.

"Rosario was the better man tonight," said Williams. "It was a great homecoming for my fans and I'm sorry I let them down. What went wrong tonight needs to and will be fixed. We're going to an immediate rematch and we look forward to returning the favor." 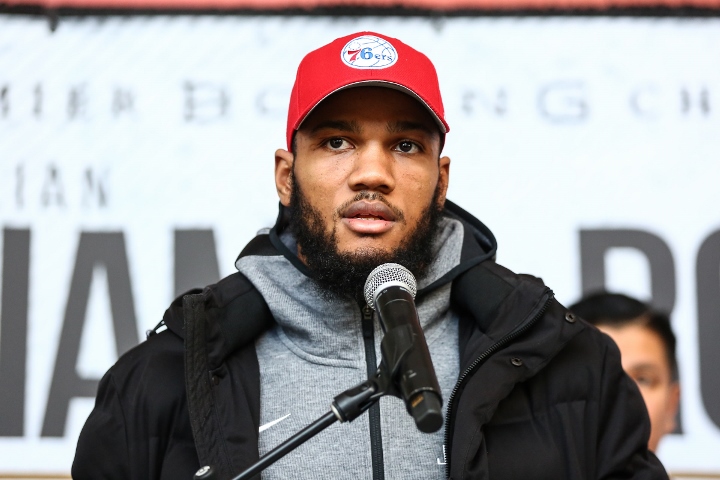 In his first world title fight, the Dominican Republic's Rosario landed power punches from the outset and opened up a cut on with a punch over Williams' right eye in the second round. Williams was landing power punches of his own, but was unable to stop Rosario from coming forward.

In round five Rosario landed the punches that would ultimately lead to the end of the fight, hitting him with hard straight right hands that immediately slowed Williams.

Rosario sensed his moment and came forward with big punches, while Williams tried to hold and survive. Eventually the onslaught proved to be too much, and referee Benjy Esteves halted the bout 1:37 into the round. At the time of the stoppage, Rosario led 39-37 on two cards, with the third card scored 38-38.

"I wasn't surprised he was so good," said Williams. "I told everybody he's a real fighter. I have to accept it. The cut blurred my vision a little bit but it wasn't the reason why I lost. He was the better fighter tonight. We've got a rematch clause. I'll see him again soon. I'll be back."

[QUOTE=UNBANNED;20342141]You arent a pro athlete so it's different. And, like Bread, you conveniently give RJJ a pass. Again - everything that made RJJ special was based on his athleticism. Once that went so did he. And PEDs - specifically -…

[QUOTE=The D3vil;20341578]LMAO, so literally Canelo's you only evidence of him being a racist. 1. Roy Jones tested positive for Ripped Fuel, something that you buy from GNC (I know, I've bought it), not a steroid or a growth hormone. Not…

Rosario won’t last long leaving his chin hanging out like he did. He got lucky Williams isn’t a big puncher. That fight took something out of both of them, but Rosario is the one that needs to be careful leaving…

[QUOTE=UNBANNED;20339685]Everyone I work with is black and everyone we work for is black. No big deal. Clintons and Bidens are Republicans. Sanders is the man and a real Democrat We disagree on Bread. He hates on Canelo for juicing and…

[QUOTE=The D3vil;20339621]Only Canelo's nuthugging ******s believe that about Bread who regularly gives GGG, Chocolatito, and tons of other fighters of all races props. And I don't care how you vote. Plenty of racist Democrats like The Clintons & Joe Biden,…