The junior middleweight division is ready to roll again and Julian ‘J-Rock’ Williams plans to serve as an integral part of it.

Fully healed from surgery and over his previous title-ending knockout loss earlier this year, Philadelphia’s Williams is now armed with a two-fight plan. The former 154-pound titlist is eying a ring return as soon as the brass at Premier Boxing Champions (PBC) can secure a fight date, with the intention of picking up a win and challenging for his old title—if not more.

“The next step is to get back in the ring as soon as possible,” Williams (27-2-1, 16KOs) insisted during the most recent edition of PBC’s Time Out With Ray Flores segment on Instagram Live. 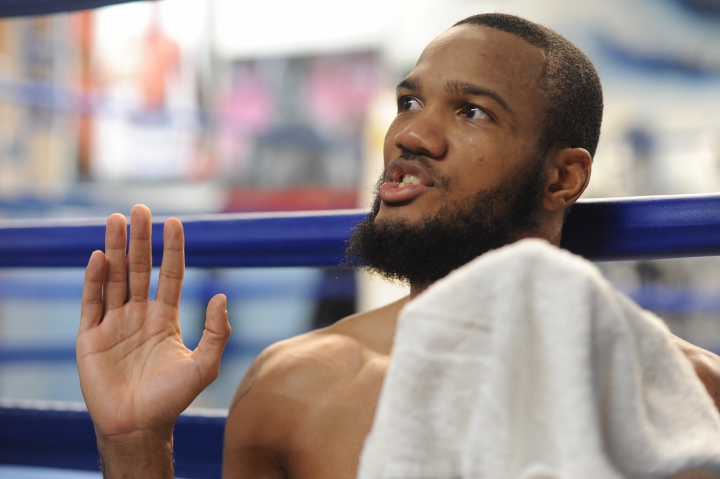 The 30-year old Philly-born and bred product hasn’t fought since a stunning 5th round stoppage loss to Jeison Rosario (20-1-1, 14KOs) this past January live from Fox in his hometown. The bout was a voluntary defense, the first of a title reign which began with a rousing 12-round victory over then-unbeaten IBF/WBA/IBO titlist Jarrett Hurd (24-1, 16KOs) last May.

Williams had the option of pursuing an immediate rematch with Rosario, but declined in favor of resting and also moving forward with surgery under both eyes, which would have left him unable to train until May or June at the earliest. It became a moot point, as gyms were closed and the sport shut down as a whole since mid-March due to the ongoing coronavirus pandemic.

“I’ve decided to go against exercising the rematch clause because I needed to get surgery on my face,” notes Williams. “I had a lot of scar tissue under both eyes. Instead of going in there and possibly developing more scar tissue, I decided to go and get the surgery.”

With boxing back to somewhat of a regular flow and gyms back open (for now), boxers are eager to resume their careers. Chief among them is Williams, whose own return comes fueled with new purpose.

A win in January would have placed Williams in position for an undisputed junior middleweight showdown versus Jermell Charlo (33-1, 17KOs), who regained his WBC title with an 11th round knockout of Tony Harrison in their thrilling rematch last December.

It appears that such plans remain in store for Charlo, although no longer against Williams but rather than man who has the rest of the relevant hardware at junior middleweight.

“I think I’m gonna take an interim fight,” Williams revealed, before spilling some tea. “Then I’ll be ready to fight of—from what I hear, I think Rosario and Jermell is gonna unify, fight for the undisputed championship.

“I’m gonna get the winner of that fight.”

PBC representatives declined comment to BoxingScene.com, as it is against company policy to discuss bouts that have not yet been announced as official.

[QUOTE=millcitymauler;20661395]It'll be interesting...154 is such a fun weight class right now. This pandemic couldn't have come at a worse time.[/QUOTE] Agreed and I'm hoping that there can be live events with social distancing protocols in place, like maybe 25-50% attendance…

[QUOTE=whollisboxing;20661321]I truly believe that J-Rock felt pressure to win impressively (i.e. by knockout) vs. Rosario whereas he just focused on winning vs. Jarrett Hurd. Time will tell as you said but for now I believe that it's just a matter…

[QUOTE=millcitymauler;20661141]He definitely has a chance, but I think we'll find out soon if he's just not able to tie his man up, or if he is legitimately chinney. Time will tell.[/QUOTE] I truly believe that J-Rock felt pressure to win…

At least at superwelter fighters aren't scared of each other

[QUOTE=whollisboxing;20659906]I think J-Rock fought the wrong fight against Rosario and now he is back to being the underdog like he was against Jarrett Hurd. It seemed like Williams' pride got the best of him because he was trying to bang…