During an interview from last week, Morales was asked for his thoughts on why a fight with Marquez had never come together.

Morales, 43-years-old and also a former four division champion, retired from boxing in 2012, after getting knocked out in his rematch with Danny Garcia at Barclays Center in Brooklyn.

He explained that Marquez was not at the top level during the prime years - when Morales was going through numerous wars. 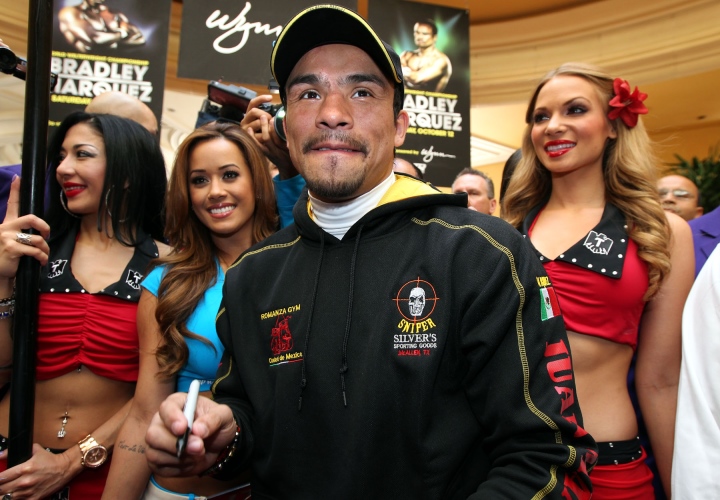 Morales also took a swipe at the comparisons that many fans make when it comes to their respective wins over Manny Pacquiao.

Morales explained that he didn't need a win over Pacquiao to define his career - and he also made it clear that it didn't take him four fights, he got the job done the first time.

"My career was not defined by Pacquiao. I didn't need to beat him. I don't want to be too arrogant but nobody gave me a boxing lesson," Morales explained to Fox Deportes. "Winning by knockout is important, but for me it was better to dominate them, make them suffer inside the ring.

"When I was fighting Barrera, when I was gaining weight [and moving up], Marquez was not there... he was fighting with people who were just starting out. It wasn't until I left boxing for a little while, that Marquez catapulted up [with respect to his standing among top fighters]. While I was were there, he didn't do that. I didn't need four opportunities to beat Pacquiao."

Marquez raised his eyebrows at the statements, explaining that he faced Pacquiao four times - because he was robbed a decision win in the first three meetings.

"He (Morales) says he did not need four fights to beat Pacquiao," said Marquez to ESPN Deportes.

"You have to remember that in the first fight, Erik Morales did pretty well and then what happened? He ended up getting knocked out by the Filipino fighter. I needed four fights, why? That is very obvious and people know it, because each of those fights ended with controversial decisions, decisions where I basically beat him, in my opinion. Everyone has his opinion, and I respect him, but Pacquiao himself was not satisfied with what he did in every fight, and even the decisions, especially in the third fight.

"In some way, I respect the career of any fighter and their opinion... in this case Erik Morales, but I do not agree with what he says; people know what I was capable of, people know what I did in the ring And he mentions that he only needed one fight to beat [Pacquiao], but, what he didn't tell you is what happened after that, in the second and third fight. I needed four, 42 rounds, to show who had won in the previous fights... and the truth is I was very satisfied with having done what was done, facing at that time a great fighter like Manny Pacquiao."

Marquez also stated, that during his respected career he was denied a mandatory title shot with Morales.

"The fight did not happen because you have to remember that at the time he was a fighter being supported by the promoter [Zanfer] and by a sanctioning body [WBC]. What they didn't want is for their fighter to lose and not continue generating business for them, that's what happened," Marquez explained.

"The fight never happened, the right thing was never done, I was in the best position to fight for the championship, I was ranked number one, we even went to the house of the president of the World Boxing Council to request that opportunity; if I remember correctly, when Barrera beat Erik Morales the third contest. Barrera left the title vacant, I was ranked number one in the WBC and they make the rules... and what they did was have Erik Morales and Paulie Ayala fight for the vacant belt. The opportunity was presented to Morales after losing the contest [with Barrera]."

[QUOTE=komandante;20574753]JMM was a cheat ask Memo the genius.:moon:[/QUOTE]your mother and grandmother are cheats! Ask any filipino guy!

It is always hilarious watching Pacroid fans scream "peds" when Marquez is brought up as if Pacroids wasnt roided out the wahzoo ever since Morales schooled him in their first fight. Must suck being a Pacroid fan knowing that his…

[QUOTE=George Orwell;20575606]The acne on JmM was ridiculous towards the end. Still an ATG fighter, but would like to see what his back looks like right now (if it cleared up) Maybe someone can ask his wife[/QUOTE]why dont you try to…

Nobody gives a **** about this petty BS, but it makes you wonder about the best fight that never was.

The acne on JmM was ridiculous towards the end. Still an ATG fighter, but would like to see what his back looks like right now (if it cleared up) Maybe someone can ask his wife