The foursome of Sugar Ray Leonard, Thomas Hearns, Marvelous Marvin Hagler, and Roberto Duran will likely always be the gold standard for a perfect four-way rivalry. From 1980-89, they squared off nine times, engaging in three Ring Magazine Fight of the Year winners and that’s with the first Duran-Leonard fight finishing as a runner-up.

A case can be made that the most satisfying perfect foursome since the 1980s has been happening over the last eight years.

It took longer to realize it was happening.

The night of the first “Superfly” card in September 2017 is when the picture came into focus. Juan Francisco Estrada scored a knockdown in round ten to eek out a one point victory on all three cards to defeat Carlos Cuadras. Srisaket Sor Rungvisai answered a debatable decision win over Roman Gonzalez with a knockout finish in their rematch.

The logical next fight was Sor Rungvisai-Estrada.

That’s exactly what we got.

It was the final combination of the four remaining before all that was left were rematches. Dating to 2012, with seven contests made in the Jr. bantamweight division, these four have squared off eight times. Two of the bouts, Gonzalez-Estrada, Gonzalez-Cuadras, and Sor Rungvisai-Gonzalez I, were outright classics. Both Estrada-Sor Rungvisai fights were excellent and they remained tied at one all; Estrada-Cuadras was a damn fine scrap too.

Cuadras-Sor Rungvisai was fairly one-sided early and ended on a cut just when it was getting good.

There hasn’t been a bad fight in the bunch.

Friday night (DAZN, 7 PM EST), chapter nine of this saga unfolds with every reason to think there are a few more chapters to be written before it’s over. Cuadras enters the rematch with Estrada with the perception that he might not belong at the elite level anymore. Since the loss to Estrada followed immediately by a loss to another world class battler in McWilliams Arroyo, Cuadras has been adrift.

Sor Rungvisai and Estrada had each other. Gonzalez rejuvenated his career earlier this year with a win over Khalid Yafai. Cuadras, conversely, has been off Broadway, flirting with bantamweight before moving back down in his last fight and lining up what could be his last big chance. Cuadras hasn’t looked great in scoring three straight wins but Estrada is a different sort of motivator.

What Cuadras has left is likely to be spilled on the canvas, win or lose.

Estrada has motivation as well. Of his three losses, two are avenged. Estrada knocked out future titlist Juan Carlos Sanchez seven months after a decision defeat in 2011. He turned a points loss to Sor Rungvisai in 2018 into a decision victory in 2019. The rematch of the fight that announced Estrada to the world, his decision defeat to Gonzalez in 2012 at Jr. flyweight, has been discussed and unconsummated for far too long. The assumption is that, if both win this Friday (Gonzalez defends the WBA belt on the undercard), chapter ten is next.

Both men have to win first. If history is our guide, we’ve got plenty to look forward to before we look ahead. 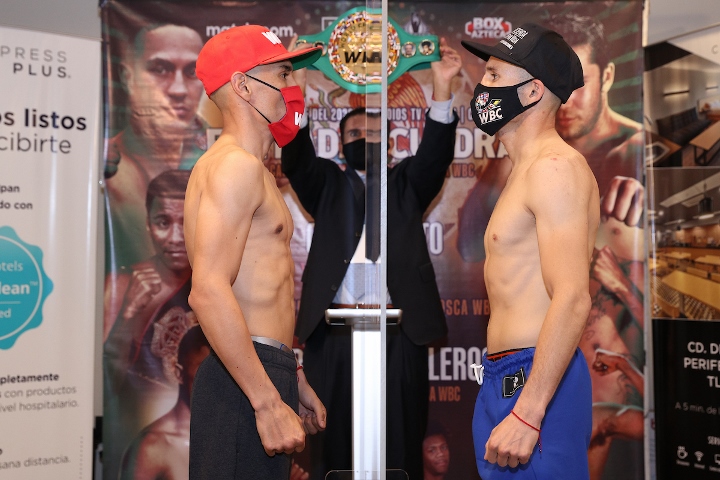 The Case for Estrada: Estrada might be one of the best fifteen round fighters in the twelve round era. What is meant by that is he’s been an elite prizefighter for most of a decade and one who might have been even better in an earlier era. Estrada is often a slow starter who uses his jab and vision to slowly digest the incoming and then adjust to take away the strength of his opponents. He’s fundamentally as sound as any fighter in the sport. There are times where Estrada settles into dominance early; others where it takes awhile to start to turn up his offense. His first title win, against Brian Viloria, showed off his ability to process an opponent and take over down the stretch. Against Cuadras the first time, the slow start almost cost him. Cuadras built an early lead with an edge in quickness and activity. Without the knockdown, the fight was dead even...but Estrada got the knockdown. His second half against Cuadras was the difference and was almost the difference in the first fight with Sor Rungvisai. So far, Estrada is perfect in rematches. With the stakes high here, Estrada is best served to start at least a little earlier and make Cuadras remember the late rounds from their first encounter. A desperate Cuadras will be a more dangerous one if he is allowed to build confidence in the early going.

The Case for Cuadras: Ironically, it may be smart for Cuadras to try to start a little slower in this one. In recent fare, Cuadras has looked markedly slower and been easier to hit. Is that a sign of too much decline to compete here, or a need for greater motivation? Roman Gonzalez’s performance against Khalid Yafai was a reminder, after two outings where Gonzalez looked slower and more vulnerable than he ever had, of what having something to fight for can mean. Cuadras has something to fight for here. It’s his first chance to regain the belt he lost four years ago and a chance to beat the perceived best fighter in his class. It’s a fight where both fighters are shaking off a year and change of inactivity. The rest may ultimately have been more helpful for Cuadras. If he can fight himself into form over a couple rounds on Friday, his combination punching, angles, and activity could make this another white knuckle affair heading into the championship rounds.

The Pick: Estrada’s perfect record in rematches might not stay intact forever but it’s likely to go to 3-0 here. Estrada is the more cerebral and rounded fighter of the two, and makes better adjustments. Cuadras isn’t going to be easy and this should be an entertaining fight. Cuadras’ chin and guts will make for some exchanges and this might even feel pretty competitive in the first half. It won’t stay that way. Estrada’s jab and sharp combinations will have him in control and it wouldn’t be a shock if this one ends inside the distance sometime after the eighth.

Roman Gonzalez has to handle his end of things and it won’t be easy for him either. Israel Gonzalez gave Yafai fits and is only 23. Longer and naturally larger than Chocolatito, this is a chance for him to change the whole course of his fistic life. Was Yafai a one-off for an aging fighter or the start of a second wind for the future Hall of Famer? There is at least the potential for an upset in both of the big name battles on this DAZN card. There is still much road to travel to get to the overdue Gonzalez-Estrada sequel...The pick here for Vasyl Lomachenko over Teofimo Lopez was wrong but it’s surprising to see how many seem to want to wish away what happened. No, there was not a case for a draw in that fight. Lopez won. Period. All three judges had it a shoutout through seven, and those scores were spot on. The idea that one could give a round or two to Lomachenko in that batch doesn’t mean anyone should have. A couple of the rounds scored here for Lomachenko, rounds eight through eleven, were closer than anything in the first seven, meaning a Lopez decision awarding him nine or even ten rounds wasn’t unreasonable. Julie Lederman’s card, giving eleven frames to Lopez, was too wide and merits criticism but it might not have been as bad as it sounds on closer inspection...Would upsets of Estrada and Gonzalez possibly set up Cuadras-Sor Rungvisai II? That’s a rematch that would feel like a brand new fight for the multitude who likely never saw their first encounter.