Josue Vargas overcame his father’s absence, a cut above his left eye and an aggressive opponent to extend his winning streak Tuesday night.

The southpaw from the Bronx beat Mexico’s Salvador Briceno by unanimous decision in a 10-round junior welterweight encounter ESPN broadcast from MGM Grand Conference Center in Las Vegas. Judges Tim Cheatham (100-90) and Eric Cheek (100-90) scored all 10 rounds for Vargas, who won nine rounds on the card of judge Max De Luca (99-91). 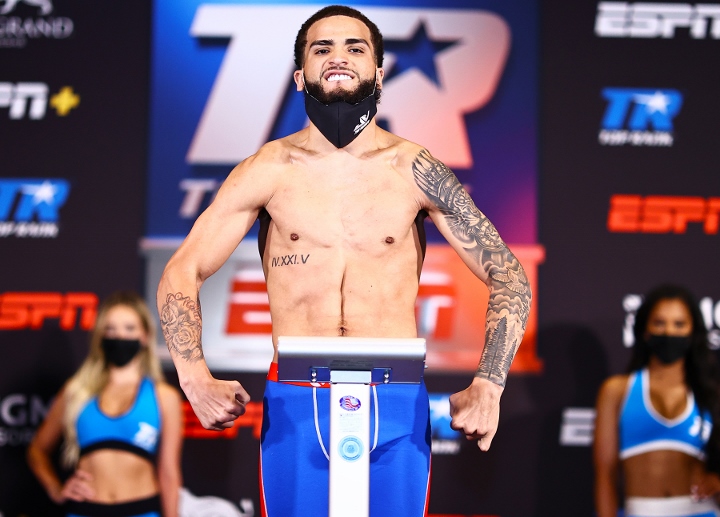 Vargas fought without his father and trainer, Elario Vargas, in his corner.

Elario Vargas violated the Nevada State Athletic Commission’s COVID-19 protocol by leaving Top Rank’s “Bubble” and walking around MGM Grand without wearing a mask. He was forced to leave the property before his son’s fight.

Josue Vargas grew emotional while discussing the situation during an interview with ESPN’s Bernardo Osuna. Veteran trainer Raul “Chino” Rivas took the lead in Vargas’ corner in the absence of his father.

Having a different handler in his corner didn’t seem to impact Vargas’ performance.

Briceno spent much of the 10th round trying to track down Vargas, who landed occasional shots and moved away from his fatigued foe. Vargas was in complete control by then and obviously way ahead on the cards.

Vargas hit Briceno with two lefts to the body and a straight left that knocked his opponent off balance in the final minute of the ninth round. By then, Briceno was bleeding from a cut around his right eye.

Vargas landed left hands and jabs during the seventh and eighth rounds, when he completely controlled distance and obviously out-boxed Briceno.

An accidental clash of heads caused a cut on Vargas’ left eyelid halfway through the sixth round. Referee Robert Hoyle called for a break in the action with 1:26 to go in the sixth, so that a ringside physician could examine the cut.

Vargas went back to battling Briceno inside during the fifth round, but Briceno didn’t land much on him in those three minutes. Vargas landed a right hook and then a straight left in the final 30 seconds of the fifth round.

A straight left by Vargas temporarily stopped Briceno from throwing punches 40 seconds into the fourth round. Vargas did a better job in that fourth round of boxing Briceno from a distance, a strategy that favored him.

Briceno continued applying pressure throughout the third round, when they often traded on the inside.

Vargas landed a left uppercut and followed with a straight right hand about 1:10 into their fight. A jab by Vargas snapped back Briceno’s head with about 25 seconds remaining in the opening round.

Is embarrassing what his father/trainer did in disrespecting the protocols, but proud of the mental fortitude of Josue Vargas to overcome this adversity and fought a good fight with good display of skills against a big, strong, tall and rangy…

Pops was out chasing tail