Josue Vargas’ career has had plenty of stops and starts over the last five years, but none quite like the ones he’s experienced since March.

On March 17, Vargas was slated to fight at Madison Square Garden, a momentous occasion for a fighter from New York. Unfortunately, just days earlier, the world realized the severity of the COVID-19 virus and officially entered a global pandemic. That event, along with every other event and every non-essential business closed down for the foreseeable future.

The super lightweight had dealt with obstacles before, including plenty of fight cancellations, but he never had problem accessing a gym.

“I took three weeks off. I was a little bit depressed. I wanted to fight, I wanted to get that win. But eventually we couldn't fight that day. So I took three weeks off, and we found a little parking garage and we put up boxing bags there, my friend's father put in a double-end bag, and we were there for weeks until we found a private gym in Manhattan that they could open up for me,” Vargas told Boxing Scene.

Vargas set up shop there for a little while, before finding his way to the hastily-reopened state of Florida, where he was able to train with more freedom, albeit in an uneasy environment. As he described it, he did nothing but put his mask on, go train, go for a run, and get back to the house.

It’s under these circumstances that the 22-year old enters the biggest fight of his career, a co-main event slot on ESPN against Mexico’s Salvador Briceno this Tuesday night. Rather than fighting in front of a packed crowd at MSG, he’ll fight at the MGM Grand, albeit inside “The Bubble,” in front of no fans whatsoever.

Perhaps it’s fitting for Vargas, who has always received less than he has been promised in his career. Born in Puerto Rico, Vargas and his family moved to New York when he was five years old, and three years later he started boxing. By the age of 13, the New York Daily News had dubbed him a “boxing prodigy,” and referred to him as “maybe the next Sugar Ray Robinson,” portending great things for his career. After winning several national tournaments and scoring wins over future Olympians such as Shakur Stevenson and Richardson Hitchins, Vargas surprisingly turned pro at 17.

In this sense, Vargas is like a boxing version of prodigious basketball players like LaMelo Ball who fast-tracked their professionalism in another country in order to opt out of the NCAA pathway. Instead of seeing his amateur career to its logical end and then waiting for American promotional offers, as is the typical route, Vargas went to Mexico where he was able to have four pro fights at the age of 17 (most US jurisdictions won’t allow professional fighters under the age of 18, save for a handful who will allow it with parental permission) in 2015 and 2016. Not long after, Mayweather Promotions came calling and signed him to a deal. 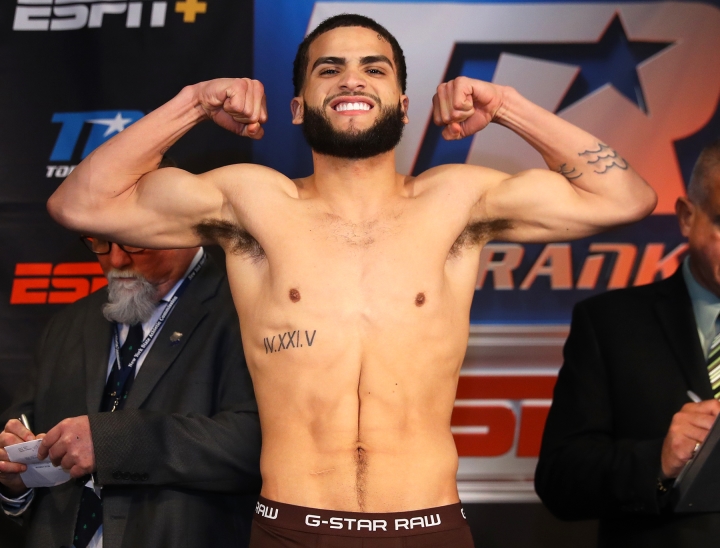 The residual attention from Mayweather and ever-present cameras during sparring sessions aided his name recognition, but after a fluky disqualification loss, in Vargas’ words, the promotional outlet mostly “kept him on the bench.” In 2018, he began fighting regularly on the undercards of Evander Holyfield’s Real Deal Promotions events in Brooklyn, but the Real Deal doors soon closed for good too.

In 2019, he finally found stable housing in the form of Top Rank, which has been able to showcase him in premium venues on the east coast, including MSG twice.

“I’ve been through a lot,” said Vargas. “I know I’m a great fighter. There’s a lot of talent in me.”

Despite some of the turbulence in the early stages of his career, Vargas has always maintained a healthy buzz in the boxing media. His previous affiliation with Mayweather and sparring sessions with Gervonta Davis, videos of which are readily available online, have made for easy fodder for YouTube journalists who often drive the communal boxing discussion.

Vargas has gathered a significant following in the New York area, especially within his native Puerto Rican community. It wasn’t unusual to find Vargas greeting fans and taking pictures for hours in the lobby of King;s Theater or MSG following his bouts. On Tuesday, Vargas says he will don traditional Taíno attire during his ring walk (Vargas is of Indigenous Puerto Rican descent) and even play a little Marc Anthony for his entrance as well, which he plans to make his trademark.

“In New York, where I'm living now, a lot of people know me. But I want to put my name out there more in Puerto Rico, where I was born. I don't feel like I have a big fanbase in Puerto Rico quite yet, so that's something I want Top Rank to help me with. I want my name to ring bells over there,” said Vargas.

A victory over Briceno, given the storied Puerto Rico-Mexico rivalry in boxing, certainly wouldn’t hurt his cause. Having captured a regional belt within the IBF last year, Vargas is quietly approaching the door of title contention, something that might have been unthinkable even two years ago in the midst of professional uncertainty.

“There's always something popping up. You see how I'm the co-main event? I didn't know that would happen so soon. Anything could happen. I could be fighting for a world title next year, I could be in the main event, we don't know,” said Vargas. “I'm just trying to do it smart and do it the right way, that way I don't have any problems in the future.”