Joshua: I Really Want Bellew To Beat Usyk, He Has The Punch

Bellew will challenge Usyk for the WBO, WBA, IBF, WBC cruiserweight titles on November 10 at the Manchester Arena.

Bellew is a massive underdog in the bout, with Usyk regarded as one of the best pound-for-pound fighters in the sport. 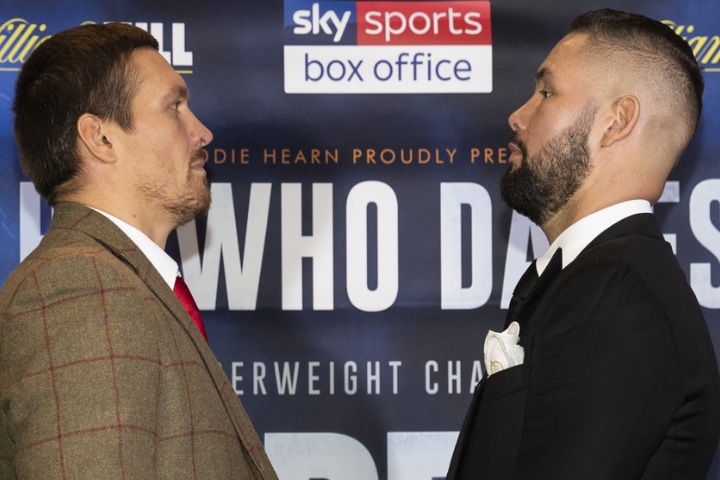 But Bellew has upset the odds several times since moving up from the light heavyweight division.

He captured the WBC title at cruiserweight and then vacated the belt to move up to heavyweight to secure back to back knockout wins over David Haye.

One thing Bellew has is power, and Joshua says the Liverpool fighter can change that entire fight with one shot.

"From a supporter's perspective it's always going to be entertaining because I really like rooting for Bellew," Joshua told Sky Sports.

"I really want him to win, so my passion is with him, regardless. Then, from an entertaining point of view, Usyk is like a perfect boxer, so I hope Bellew is working on his counter-punches as well, because that's the way to knock him out - let him tippy-tap and then explode. As we've seen Bellew can counter-punch and he's got a dirty left hook, and if he can land that I think he'll do well."

"If I am honest, Usyk is the favourite, straight-talking, because he's unbeaten and he's done it at cruiserweight and he's undisputed. But, the thing with boxing, from like middleweight up, it takes one punch. One punch can change the course of a fight and, as I was saying, Bellew's got that in the locker. We all know he's got that as well, so that's what makes it so interesting."

Can Tony Bellew hit harder than Joe Joyce? Usyk took Joyce's best punches and walked him down in the last 2 rounds of their WSB bout. Unless Usyk walks Bellew down, counter punching ain't gonna work. Also, Usyk ain't no…

Fair play A.J. ....If he has any chance it will most definitely as A.J. say's be on the counter. I take my hat off to Tony for taking this fight as he could will end up being totally dominated and…

[QUOTE=PotentialToast;19248263]Next Monday, freak result aside, Usyk is WBO Super Champion and moves to heavyweight where he can request to be installed as the WBO Heavyweight mandatory. Usyk v AJ in April?[/QUOTE] I think April might be a lil early for…

[QUOTE=champion4ever;19247321]Oleksandr Usyk may be a greater threat to Anthony Joshua than Deontay Wilder. After all, he is also an Olympic Gold medalist just like AJ. In addition, he is a fundamentally sound boxer and is from the same Olympic class…