Mike Plania competes in a weight class above Joshua Greer Jr. and has never been knocked out.

That didn’t stop Greer from bringing his trademark pillow, with the words “Night Night” on it, to their weigh-in Monday in Las Vegas for their fight Tuesday night.

Chicago’s Greer stepped on the Nevada State Athletic Commission’s scale at 120.1 pounds, but he was wearing protective coverings on his feet and thus officially weighed exactly 120 pounds, according to the NSAC. The Philippines’ Plania officially weighed in at 119½ pounds. 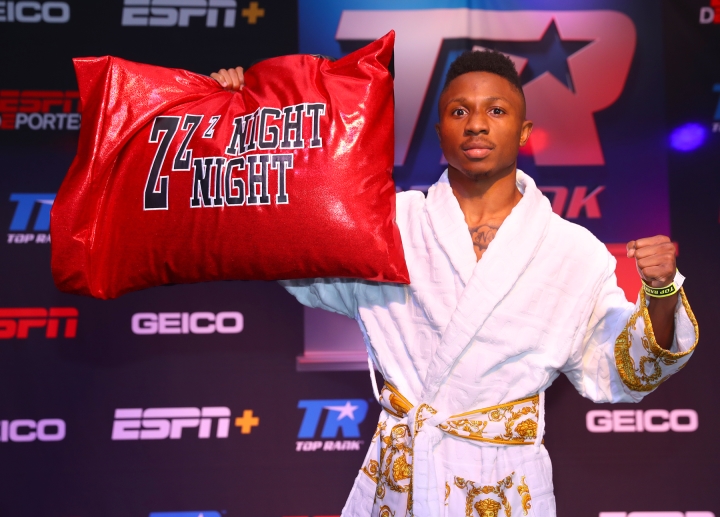 Greer is the WBO’s number one challenger for Johnriel Casimero’s bantamweight title and the IBF’s second-ranked contender for Naoya Inoue’s 118-pound championship. He agreed to fight Plania at a contracted catch weight of 120 pounds, exactly in the middle between the bantamweight and junior featherweight maximums, 118 and 122 pounds, respectively.

The 26-year-old Greer has won 19 straight fights since he lost a four-round majority decision to Philadelphia’s Stephen Fulton (18-0, 8 KOs) in December 2015.

The 23-year-old Plania takes an eight-bout winning streak into this higher-profile fight. He hasn’t lost since former WBA/IBO bantamweight champ Juan Carlos Payano (21-3, 9 KOs) beat him by unanimous decision in a 10-rounder in March 2018.

The telecast Tuesday night is scheduled to start at 8 p.m. ET/5 p.m. PT with a 10-round bout between unbeaten welterweight prospect  Giovani Santillan and Antonio DeMarco.

Below are the official weights for the three bouts ESPN will televise Tuesday night between the Santillan-DeMarco match and the Greer-Plania fight.

I have liked this kid for 3 reasons his name bing Joshua, like my last name, he from Chicago my birth home and he came to Detroit and knockout are boy clean and brought the pillow out. He little but…

I'm just glad to have more boxing headed our way!

We have a fight. Joshua Greer vs Mike Plania is going to be competitive, depending what Mike Plania appear. Love boxing in Tuesday. :boxing: