Joshua Franco came on down the stretch, outlanding Andrew Moloney 103-50 over the last five rounds and scored a knockdown to capture the WBA "regular" super flyweight title at the Conference Center of the MGM Grand in Las Vegas. 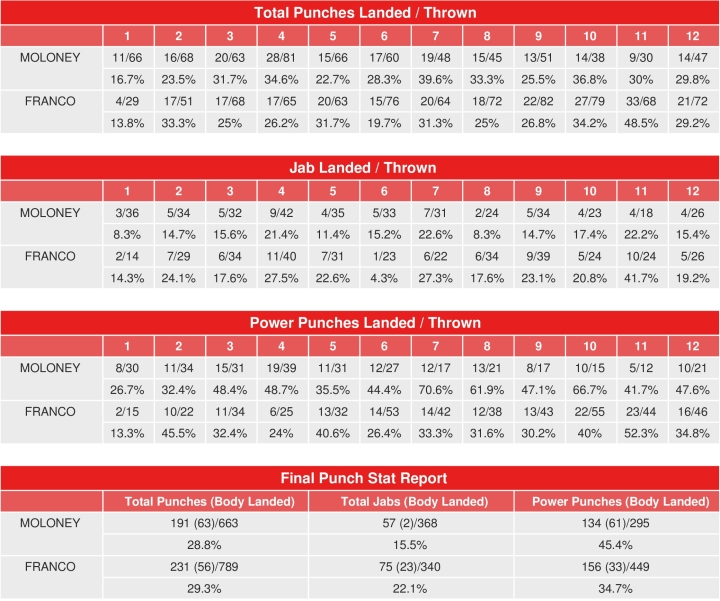 Moloney came out throwing a lot of punches in the first round. He was using a lot of jabs and then coming back with big punches. Franco began to open up in the second, as he started to time Moloney and land shots of his own at close range - especially the uppercut.

A very active third, as they were trading a lot of punches at mid-range. Moloney made adjustments in the fourth, moving around and landing from the distance, especially to the body. In the fifth, Franco got the fight back to mid-range and was he landing his combinations to the head and body.

Franco continued to control the fight at mid-range as they fought in the sixth with crisp exchanges. The seventh was close with each man having moments in the round. In the eight, Franco was picking up the pace and throwing a lot of punches. Moloney was fight back with hard counters, targeting the body. During the ninth, Franco landed some very big shots to the head of Moloney.

Franco was really doing a number on Moloney in the tenth, battering him with punches to the head and body. The left eye of Moloney was cut and streaming blood and there was blood coming out of his mouth.

In the eleventh, Franco rocked Moloney and scored a knockdown with a series of hard punches. Moloney was allowed to continued, with Franco going right after him to get the finish.  Moloney was able to survive. In the final round, Franco was in full control and taking the fight to Moloney. Franco was landing the harder punches and doing more damage, but Moloney was showing heart and fighting back hard.

I have Maloney the 1st and the 4th, I have the rest of the rounds to Franco... 10-2 with a knockdown this fight wasn’t as close as the judges scored it but at least they got it right