Joshua Franco & Oscar Negrete Fight To Another 10-Round Draw

Joshua Franco and Oscar Negrete went at it in another very competitive fight Saturday night.

For the third time in less than 10 months, though, virtually nothing was resolved. The bantamweight rivals settled for another 10-round split draw, this time on the Vergil Ortiz Jr.-Antonio Orozco undercard in The Theatre at Grand Prairie in Grand Prairie, Texas.

Judge Jesse Reyes scored their fight for Franco, 96-94. Judge Javier Martinez had it by the same score, 96-94, but in Negrete’s favor. 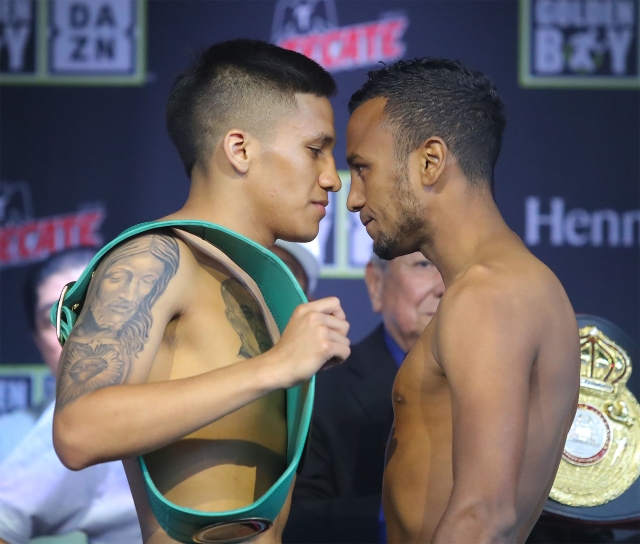 Judge David Iacobucci scored the action even, 95-95, which rendered their third fight a split draw.

They boxed to a 10-round split draw October 18 in Costa Mesa, California. San Antonio’s Franco edged Negrete by split decision in their 10-round rematch April 25 in Indio, California.

The Colombian-born Negrete, of Rosemead, California, feels he clearly deserved to win their rematch, which was why their third fight was made.

The eighth, ninth and 10th rounds were back-and-forth periods in which each fighter landed his fair share of power shots. As was the case for most of their competitive bout, Negrete came forward for much of those three minutes.

A right hand by Negrete backed Franco against the ropes with about a minute to go in the sixth round.

Franco was the busier, better boxer in throughout the fifth round, though Negrete caught Franco with a straight right hand late in that round.

Negrete caught Franco with a left hook to the body and then a left hook to the head early in the second round. Several seconds later, a perfect right uppercut by Negrete buzzed Franco and made him move away from his aggressive opponent.

Franco recovered later in the second round and landed a few power punches of his own before it ended.

Negrete applied pressure for much of the first round. He landed a right uppercut in that opening round, which backed up Franco.

San Antonio’s Tanajara (18-0, 5 KOs) used distance, his jab and right uppercuts to comfortably beat Mexico’s Aviles (16-4-3, 6 KOs). All three judges scored each of the 10 rounds for the younger, taller Tanajara, who won by the same score, 100-90, on each of their cards.