The 24-year-old underdog from San Antonio upset Australia’s Moloney by unanimous decision and won the WBA world super flyweight title in a highly competitive, entertaining main event ESPN televised from MGM Grand Conference Center. Moloney was listed as a 9-1 favorite as late as Monday, but a determined Franco scored an 11th-round knockdown and edged Moloney on the scorecards of judges Julie Lederman (115-112), Dave Moretti (114-113) and Patricia Morse Jarman (114-113).

Had Franco (17-1-2, 8 KOs) not knocked down Moloney (21-1, 14 KOs) early in the 11th round, their back-and-forth fight would’ve resulted in a majority draw because Moretti and Morse Jarman would’ve had it even on their scorecards. Instead, Franco took the WBA 115-pound title from Moloney in the former champion’s first defense of a title he won in his previous bout.

“It’s a good feeling,” Franco told ESPN’s Bernardo Osuna. “It still hasn’t hit me yet. It’s just so [surreal]. I can’t believe it. I’m a world champion. I worked so hard for this. I knew all the hard work would pay off in the end.”

Nevertheless, his victory Tuesday night was Franco’s crowning achievement following a surprising, ninth-round, technical-knockout loss to Lucas Fernandez in March 2018 and three consecutive 10-round battles versus Oscar Negrete later in 2018 and in 2019. Franco, who was the WBA’s 12th-ranked contender for Moloney’s championship, went 1-0-2 against Negrete.

Franco connected on 40 more punches overall than Moloney, according to CompuBox’s unofficial statistics (231-of-789 to 191-of-663). The newly crowned champion was especially effective during the final four rounds, when he landed twice as many punches as Moloney (103 to 50).

After scoring that crucial knockdown during the 11th round, Franco battered Moloney for much of the final round. He pressured Moloney, who was in survival mode, and landed several stinging right hands in those last three minutes of their fight. 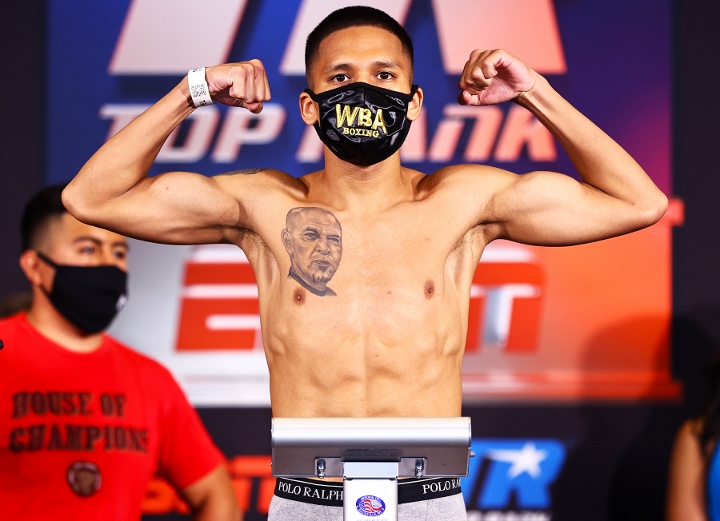 Franco’s ferocious right-left-left-right combination made Moloney bend over and touch the canvas with his gloves 35 seconds into the 11th round. Moloney never actually went to the canvas, but it counted as a knockdown because he used his gloves to hold himself up.

Franco continued hammering Moloney with hard punches throughout a completely one-sided 11th round, but Moloney managed to stay on his feet.

Moloney went down with 1:32 left in the 10th round, but referee Tony Weeks correctly ruled it a slip. Soon thereafter, though, Franco drilled Moloney with an overhand right that buzzed the champion and opened a cut around his left eye.

Franco targeted that left eye for the remainder of the round, when a fading Moloney tried to hold him at times.

Franco snuck in a short, left hook about 35 seconds into the ninth round. A jarring left snapped back Moloney’s head with just under a minute to go in the ninth.

Moloney landed a straight right and then a stiff jab late in the ninth round.

Moloney landed a thudding left to Franco’s body just before the midway mark of the eighth round. Franco came back to drill Moloney with an overhand right about 30 seconds later.

Franco’s counter left hook connected with just under 30 seconds remaining in the seventh round.

Franco connected with a short, left hook with just over a minute to go in the fifth round. Moloney worked off his jab for much of that fifth round and tried to stay out of Franco’s punching range.

A chopping right hand by Franco landed with about 20 seconds left in the fifth round.

Franco landed a left to Moloney’s body with just under a minute remaining in the third round. Franco was the more accurate puncher throughout that third round.

Moloney landed a left to Franco’s body, but Franco came back to land a short, left uppercut with about 1:20 to go in the second round. Franco connected with multiple jabs, a left hook and a right hand in the final 30 seconds of the second round.

Franco blocked many of Moloney’s punches in the first round, but he was pretty cautious offensively. Moloney was at least aggressive and active in those first three minutes.

A determined Franco overcame his slow start and eventually began breaking down the previously unbeaten Moloney.

“Robert kept me in the zone,” Franco said, referring to his trainer, Robert Garcia. “Like you said, he’s been a world champion, he’s trained world champions. You know, he knows the words to say. He kept me motivated, he kept me focused. I didn’t lose focus the whole fight and, you know, it paid off.”

I enjoyed the Franco fight alot.

[QUOTE=BigZ44;20627290]Don't underestimate Baez, he's been coming into his own lately. Looked good in wins over Melian and Flores[/QUOTE] Plus he's coming in slightly overweight. Live dog.

[QUOTE=kidbazooka;20626877]The Maloney on Thursday has an easy opponent unlike his brother did with Franco.[/QUOTE] Don't underestimate Baez, he's been coming into his own lately. Looked good in wins over Melian and Flores

[QUOTE=kidbazooka;20626019]Yes I hear ya and most other champs have held similar titles so if we wanna nitpick it goes for the rest too.[/QUOTE] I’m not defending any of those made up titles. All I’m saying is this wasn’t really a…

[QUOTE=edpboxing;20626274]He’s 24 years old, why do you suspect he’s at his ceiling?[/QUOTE] Because he looks the same as in his previous fights. The trilogy with Negrete was entertaining but repetitive. Right now Estrada, Sor Rungvisai, Chocolatito, Nietes, Ancajas beat him.…