Josh Warrington: This is My Year, I Want Carl Frampton's Spot!

Josh Warrington believes boxers have an obligation to boxing fans to make the right fights at the right time, which is why he is readying himself to take on Carl Frampton at the Manchester Arena on December 22.

The Leeds Warrior points out that some fights have been left in the file marked 'pending' for too long and can lose their appeal as a result of the delay.

There is no danger of Warrington falling into that trap, what with signing up to face two-weight world champion Frampton for a first defence of IBF world featherweight title he won in May from Lee Selby. 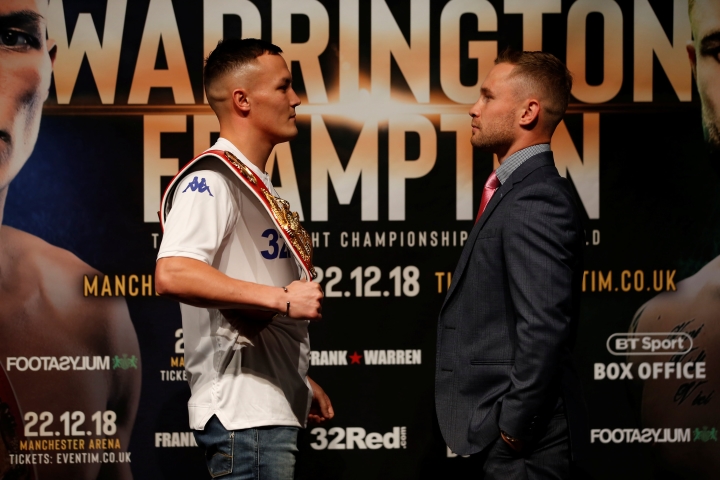 "Even when the fight was first talked about a couple of my pals said I should just have a steady defence," recalled the unbeaten Warrington, who swiftly rejected the suggestion. "The way I responded was to say there isn't an easy defence at world level and if you think there is you are maybe taking your eye off the ball.

"Frank (Warren) said this fight should happen this year, but we weren't under pressure to do so. The fight could've happened next year in a big stadium showdown, but there is the risk of a fighter getting injured and prolonging that or the dates not matching, or a fighter getting beaten.

"We are at a high level and one punch can change a fight, so get the fights going now because it is what the boxing public want to see.

"That is why the sport it booming again because fights are getting made that people want to see. When fighters dig their heels in, like Kell Brook and Amir Khan, a fight loses its gloss.

"A few years ago that would have been exciting, but not so much now. People might still want to see it, but is it going to be the same fight?

"Manny Pacquiao and Floyd Mayweather boxed a few years too late, but we are both in our prime now, so why not get the fight happening and we are doing so now.

"We want to prove who is the best and I think that is how it should be."

[QUOTE=Adamsc151;19295566]The man's a tit who ****ed up a few years ago with drugs - that's not in doubt. But he's always chased the world level fighters to no avail. I think he's finally in a mandatory spot, so hopefully it…

[QUOTE=apollocreed;19293684]Come on man Kid Galahad? He's never even won a title yet, and doesn't have any big wins either. Frampton won a title at featherweight when he beat LSC and Warrington is the unbeaten IBF champ. Galahad isn't anywhere near…

[QUOTE=Adamsc151;19291448]Frampton is ranked 1 and Warrington 2? Where, here in the British Isles? Certainly not in the entire world. I'm pretty sure most people would have at least Santa Cruz above them, probably Russell Jr and Valdez as well. Mares…