For the second time this week, Josh Warrington has reached the end of the road of a significant development in his career.

"Frank Warren and Queensberry Promotions can announce that the company has parted ways with IBF world featherweight champion Josh Warrington at the conclusion of his promotional agreement," the statement read. "The now 30-0 man from Leeds joined forces with Queensberry in 2017 and was quickly steered into mandatory position for the world title showdown with Lee Selby that he long craved. This was delivered on a memorable night at Elland Road in May 2018 and Josh subsequently defended in a huge Box Office event against Carl Frampton in the December at Manchester Arena.

"Home advantage for a mandatory defence against fellow Yorkshireman Kid Galahad was secured in June 2019, with his last fight being a voluntary defence against Sofiane Takoucht, which resulted in an emphatic second round victory." 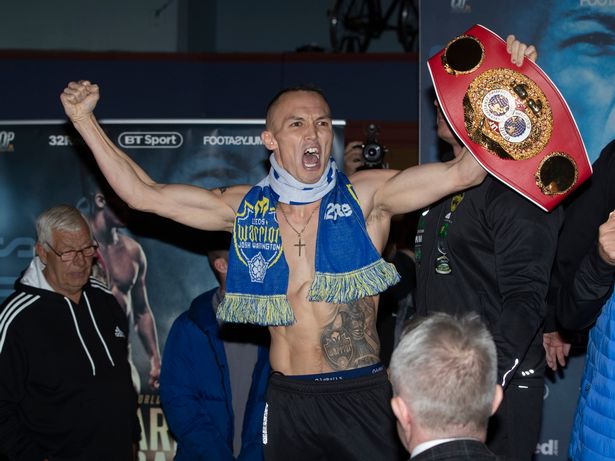 Warrington's newfound promotional status undoubtedly momentarily left him as one of the more desirable free agents in today's market, as indicated in his having already signed with rival promotional outfit Matchroom Boxing. The 30-year old featherweight remains a sizable draw in Leeds, England, which has hosted 13 of his last 17 ring starts, including each of his past two title defenses which took place in 2019. Warrington (30-0, 7KOs) secured hometown advantage for a dangerous mandatory defense versus then unbeaten countryman Kid Galahad, whom he barely edged over 12 rounds last June. Four months later came a voluntary defense and—as it turns out—his final fight under the Queensberry banner as he scored a 2nd round knockout over France's Sofiane Takoucht.

Most of the rest of the past four months has been spent going back and forth with fellow unbeaten titlist Shakur Stevenson (13-0, 7KOs), the 2016 Olympic Silver medalist from Newark, New Jersey who began his 2019 campaign calling for a fight with Warrington. The undefeated American ended the year with a title around his waist, pitching a 12-round virtual shutout of previously unbeaten Joet Gonzalez, two weeks after Warrington's aforementioned win over Takoucht.

Hopes of a May unification clash in Leeds became problematic once Top Rank, Stevenson's promoter announced plans for a March 14 voluntary title defense versus Colombia's Miguel Marriaga. Top Rank founder and Hall of Fame promoter Bob Arum publicly claimed that the plan was to get Stevenson a quick stay busy type fight before heading into a blockbuster showdown versus Warrington in June or July in the UK.

That idea was dismissed by Warren, claiming the offer was "now or never" for a May date a Elland Road, a 37,000-plus seat football stadium in Leeds. The Hall of Fame promoter confirmed to BoxingScene's Ron Lewis earlier this week that talks had hit a snag and would not be revisited at least for Warrington's next fight.

It appears that whatever is next discussed will now come without Warren's involvement. That said, the parting comes without regret at least from the promoter's side.

“I am happy to say that we delivered for Josh on every level and helped him realise his goals in the sport,” said Warren. “We all wish Josh every success for the future and will always remember the great nights we enjoyed in Leeds.”

[QUOTE=Robbie Barrett;20385293]Maybe he didn't stay because the fight wasn't happening? Warren telling Stevenson "now or never" supports this theory.[/QUOTE] He has a mandatory do now.

[QUOTE=IronDanHamza;20385790]Eddie didn't believe in Josh, Frank did and gave him big stadium world title fights on PPV. Now he's back with Eddie :lol1: Can't blame him though. More money with Eddie :dunno:[/QUOTE] There wasnt any animosity between Hearn and Warrington.…

Eddie didn't believe in Josh, Frank did and gave him big stadium world title fights on PPV. Now he's back with Eddie :lol1: Can't blame him though. More money with Eddie :dunno:

[QUOTE=Chinned;20385729]Isn't frank losing millions each year and been doing so for years?[/QUOTE] I think So He only got propped up by BT sport stepping in to broadcast his fights, but now Warren is losing good names from his stable, it…