Josh Warrington Hits Back at Kid Galahad and Ingle

Josh Warrington has dismissed claims he will lack hunger when he defends his IBF featherweight title against Kid Galahad in Leeds on Saturday night.

Warrington will go into the fight as a heavy favourite against his Sheffield opponent, whose real name is Abdul-Bari Awad, after convincing wins over Lee Selby and Carl Frampton.

Galahad’s camp believes Warrington’s transition from challenger to champion will play into their hands as the underdog seeks to extend his unbeaten professional record to 27 fights. 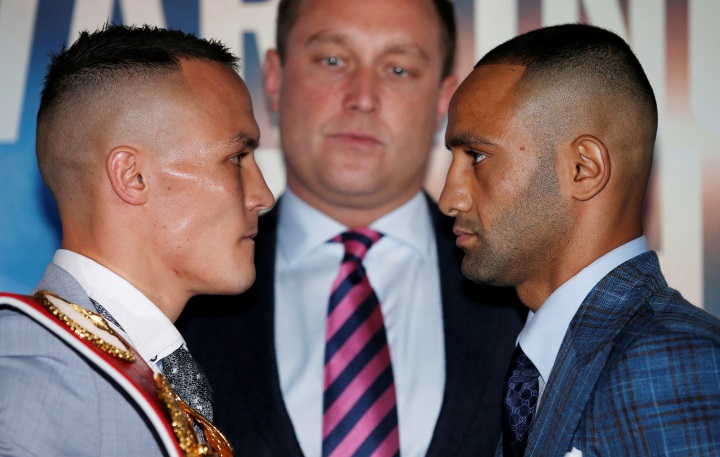 But Warrington insisted: "The support has been fantastic as always. We're here and I can't wait to go at the end of a long camp. I am hungry and I can't wait for Saturday. It has been a busy few weeks listening to Barry and his team, but let's get one thing clear. The hunger has not died one little bit.

"Because my lifestyle has changed over the last year or so does not mean I am about to roll over and let me title go away. It is my title by merit, I won it fair and square and no-one is coming to Leeds and taking it off me.

"I've set myself little goals about unifying the division and I am not looking at Barry as someone who is getting under my skin anymore. I am just looking at him as an opponent, I've got to get through him then we go Stateside for big world title fights.

"For Dom to say I have lost my hunger... He doesn't know owt about me and it is stupid for him to assume the hunger and desire is not there. In this camp I have given my all.

"For Barry to say sparring is harder than fights is a load of b*llocks.

"He can keep talking about it being his destiny and it sounds like he is saying the same things as me in my press conference against Lee Selby. It is not Barry's time. The title will be staying here."

Good judges give Galahad, who trains in Dominic Ingle’s famous Wincobank gym and counts his former gym-mate Naseem Hamed as an inspiration, a chance of causing an upset.

Ingle said: “Josh Warrington hasn’t got the same kind of hunger he had when he boxed Carl Frampton and Lee Selby. He’s the champion now, he’s not the one coming up.

“He’s coming up against an unbeaten prospect, someone with the same kind of hunger and determination that he had. Everyone’s saying he’s going to win this fight, but he’s in a different position.”