BoxingScene.com had been advised that the International Boxing Federation has set down the date of January 24th for the official purse bid for Josh Taylor's mandatory defense against Apinun Khongsong.

Sampson Boxing, who recently signed Khongsong to a promotional agreement, advised the sanctioning body that they were no longer willing to participate in negotiations and requested an immediate purse bid pursuant to IBF Rule 10A. Taylor, who holds the IBF and WBA world titles at junior welterweight, recently signed a promotional agreement with Top Rank.

The purse bid will take place at the IBF's offices in Springfield, New Jersey. Both sides (and anyone else bidding) will have to arrive by 12 noon. 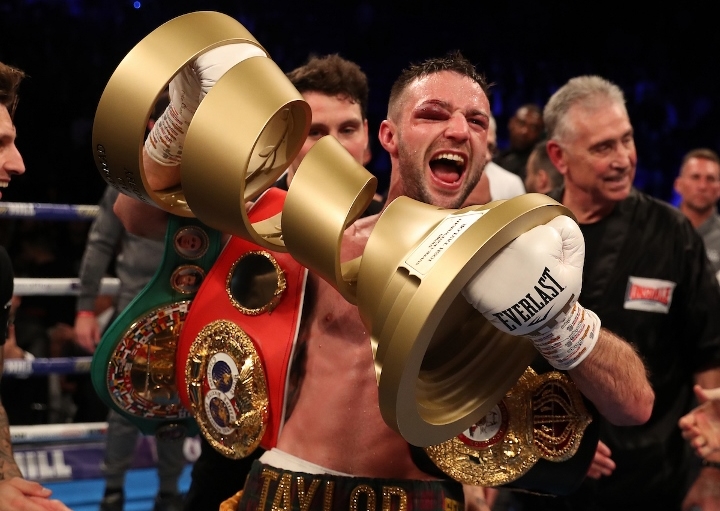 Khongsong (16-0, 13 KOs), who fought nearly his entire career in Thailand, has been out of the ring since July 2019, when he picked up a second round knockout. His last six opponents have been stopped inside the distance.

Taylor (16-0, 12 KOs) was in the ring in October, when he picked up a twelve round majority decision over undefeated Regis Prograis to unify the WBA, IBF world titles. Their bout was the final round of the World Boxing Super Series tournament.

In May of the same year, Taylor won a dominant twelve round unanimous decision over unbeaten Ivan Baranchyk to capture the IBF title, in a semi-final bout of the WBSS.

[QUOTE=1hourRun;20324917][img]https://i.imgur.com/LMZ9NFw.gif[/img] I hope Apinun Khongsong pounds the 'Tart-Tomato' until hes ketchup! Regis Pro gave Taylor that work, Josh has not recovered from that savage beating in the finals of the WBSS. I'm telling you, dont be surprised if Apinun Khongsong…

I'll agree about the alleged racist comment which he needs to sort out. The drug stuff has been denied and he himself has said that he will lead a better life outside of the ring. He's got a great future…

[QUOTE=1hourRun;20325808]Josh Taylor is a loser in life, regardless of his 'success' in the ring. I just got back from vacation and have been reading all the appalling news from this euro-redneck : the racism, drugging, incarceration. I'm surprised that he…

[QUOTE=richardt;20325795]He doesn't have to beat Ramirez, he already had a successful career in the amateurs and in the pros and became a world champion. He is a boxer, he fights for a living and like 99.9% of all boxers on…

[QUOTE=1hourRun;20325262]Josh Taylor might rob Apinun Khongsong on the scores or get a early stoppage with help of a UK ref. I just hope that somehow Apinun Khongsong's team wins the purse bid and force the 'Tart-Tomato' to defend the IBF-WBA…