Josh Taylor on Team Ramirez: Their Assh-les Twitching Like a Rabbit's Nose!

Josh Taylor says he believes Jose Ramirez is having doubts about going ahead with a fight against him for the undisputed world super-lightweight title and Taylor’s destruction of Apinun Khongsong on Saturday night in unlikely to have eased any of his concerns.

Taylor took just 161 seconds to finish of Khongsong on Saturday night in defence of his WBA and IBF titles, while Ramirez, the WBC and WBO champion, struggled to a majority decision over Viktor Postol last month, an opponent Taylor comfortably outpointed more than two years ago.

“I think he has already got doubts anyways,” Taylor said. “From what they’ve said in their interviews they are talking a lot of nonsense and I know they are worried, I know they are shaken. Yesterday and today they are putting up failed weights, undisciplined and this and that. Blah, blah, blah. That’s clutching a straws.

“I know for a fact that their assh-le is twitching like a rabbit’s nose. I’m ready to go, I’m not afraid of anyone. If his manager was that game with his fighter, he would have ended up in the tournament [the World Boxing Super Series, which Taylor won last year]. Simple as. That sent massive signals when they declined to go in. Is Ramirez himself afraid? No, I don't think he is afraid but his manager and team having faith in him that is a different story.” 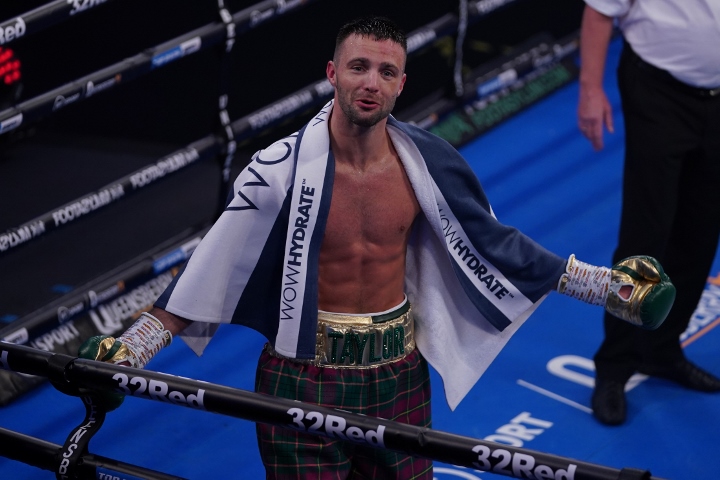 Victory over Khongsong should have cleared the way to Ramirez, although doubts about whether Ramirez must first face his WBO mandatory, Jack Catterall, and what money is available with crowds unable to attend could set that back. But Taylor thinks the fight should be made.

“I don’t think it’s too complicated,” he said. “Everything is in house. We are both with Top Rank, we are all in house so it makes it pretty easy to work out. I do understand that Catterall is the mandatory and he has been waiting for a long time but obviously personally and selfishly I want to be the one fighting him next and taking his belts.

“From a selfish point of view I would love it in Scotland in the middle of summer, Edinburgh Castle or Easter Road, where Hibs play, or if not there my second home – the Hydro in Glasgow. I’d love it to be in Scotland but, if not, I don’t care because I’ve got massive dreams of fighting in the US on a big show as well.”

Taylor said he would be happy to guarantee Catterall a fight next if he got to Ramirez first, if it helped to smooth a way to the unification fight and sais a fight against the Lancashire fighter would be an attraction.

“If everything is right, I will fight anybody,” he said. “Catterall is a great fighter. A fight for the undisputed belts, Scotland against England, the Auld Enemy sort of thing. That would be a massive fight.”

For now, Taylor wants a holiday, although restrictions mean he might not be straying too far from home because of travel restrictions. Then it will be back in the gym to work again with his new trainer, Ben Davison.

[QUOTE=Monty Fisto;20785099]Taylor doesn't put things in a charming way, but there's a ring of truth in what he says about signals being sent by Ramirez not entering the WBSS. Taylor clearly wants to fight Ramirez. Does Ramirez really want to…

[QUOTE=richardt;20783958]Other things aside, Ramirez is a much better person. Josh gets on my nerves with the things he says.[/QUOTE] Taylor doesn't put things in a charming way, but there's a ring of truth in what he says about signals being…

This lousy quilt wearing bum doesn’t know when to shut up. He almost got blinded by a midget in a robbery. He’s going to get flattened by Ramirez. Nothing about this bum is impressive apart from fighting in a very…

[QUOTE=Oldskoolg;20783881]Says the alt right crack head[/QUOTE] Taylor isn't alt right, you idiot. The Old Firm sectarianism has no counterpart in American culture. You have no idea what it's about.

[QUOTE=1hourRun;20783580]Very funny Josh. This reminds me of the funny story when Taylor was intoxicated and restrained at the police-station last year. I heard that cops performed a an[COLOR="Black"]a[/COLOR]l-cavity search to find the rest of the coke that Josh tried to…