Josh Taylor Links Up With Ben Davison After McGuigan Split

Josh Taylor has confirmed his new trainer ahead of his ring return.

The Scottish super-lightweight will be back between the ropes on May 2.

Taylor, the unified WBA Super, IBF and Ring Magazine world champion in the 140-pound division, will take on his mandatory challenger on home soil. He is set to meet Apinun Khongsong, from Thailand, at the SSE Hydro in Glasgow, with the event being screened exclusively live on BT Sport in the UK and ESPN + Stateside. 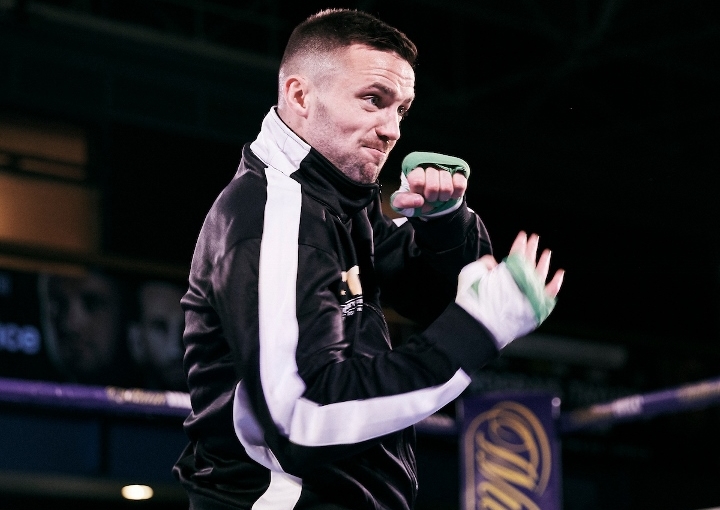 And ‘The Tartan Tornado’, who recently switched promotional teams and joined up with Bob Arum and Top Rank Inc. after leaving Cyclone Promotions while also inking an advisory deal with MTK Global, revealed that he will work alongside Ben Davison in the next chapter of his career.

“I am pleased to finally announce that I am teaming up with and going to be trained by Ben Davison in the next chapter of my career,” said Taylor on social media.

Taylor (16-0, 12 KOs) was last in the ring in October 2019 when he outpointed Regis Prograis in the final of the World Boxing Super Series tournament at the O2 Arena in London.

He won on points, by margins of 117-112, 115-113 and 114-114, and then had the high-profile fall-out with Cyclone and the McGuigans, resulting in his severing of ties with Shane McGuigan, who had been his mentor since Taylor debuted back in July 2015.

“I think Ben is a world-class coach and when I first had a couple of sessions with him, we gelled and our styles clicked straight away,” Taylor, who also had trial sessions with Adam Booth, continued. “I believe he is the best man for the job for me and will bring out the best in me.

“I’m very excited to get going for what I think is going to be very bright & prosperous partnership. Our journey starts now and we are gearing towards my mandatory defence on May 2.”

Khongsong, who has a record of 16-0 with 13 quick, was last in action last July and represents the first fight in the aforementioned deal between Taylor and Top Rank. The show will be promoted in association with Frank Warren and Queensberry Promotions.

He worked his way into mandatory position through winning the IBF Pan Pacific, which he defended thrice, and IBF Asia titles.

Undercard additions for the show will be revealed in due course.

Alright, so Josh's KO's will go down, he'll box and move and for NSB, the 'eye test' will be an F.

Taylor could beat this dude with me as his trainer, but not sure this is the right dude long term

[QUOTE=denium;20427176]Davison does seem to know what he's talking about but still lacks boxing and life experience.[/QUOTE] Gift is a gift; experience will come, but if he's good enough, it makes sense to go along for the ride. I think Davidson…

interesting collaboration i think this is

[QUOTE=pillowfists98;20427062]Bad decision. Davidson is more of a weight loss coach than a boxing trainer. There's a reason why Fury left him to go train with a real trainer.[/QUOTE] Fury said himself Davison was about defense and footwork and that he…