This was Taylor's first bout that went beyond the ninth round. And the fight seemed to be a lot closer than the official scorecards would indicate - and Taylor's own team admitted the contest was very close.

Postol's other career defeat came at the hands of Terence Crawford, also by way of twelve round decision.

Postol, a former WBC junior welterweight world champion, started at a very aggressive pace and was taking the fight to Taylor in the first round. In the second, Taylor got back on his game and started putting his punches together very well.

But Postol showed his experience and class, especially in the first half of the contest. He was using a solid jab from a distance, put his punches together well and was working hard to give Taylor his fair share of fits for most of the first six rounds.

And then in the seventh round, Taylor was briefly stunned as Postol connected with some heavy blows. Taylor was able to recover and made some adjustments as the contest played out, but Postol had sent a message about his power. 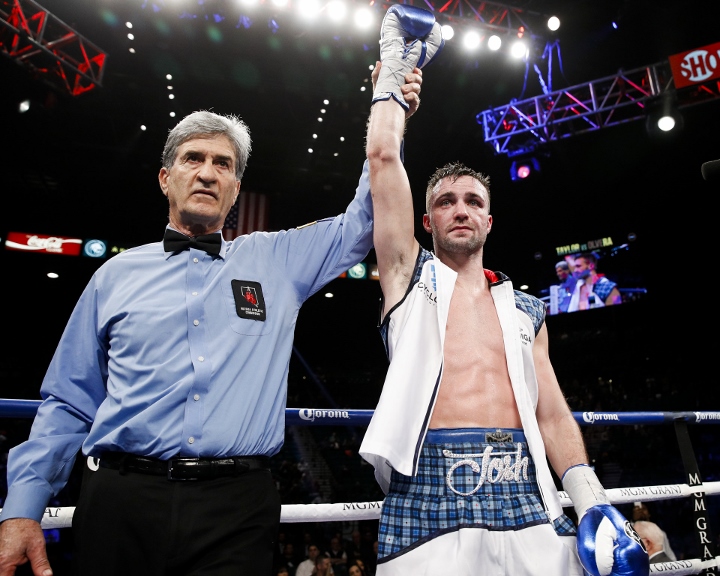 Taylor was forced to rally in the second half of the fight, with more work to the body and a bit more aggression. And that rally included a huge tenth round where Taylor landed a big left hand that sent Postol down in the closing seconds.

During the eleventh, Postol came firing back as they traded power shots at close range. And in the twelfth and final round, Postol was a bit spent as Taylor did most of the work and did his best to secure the fight.

During the entire fight, Taylor's team was urging him to pick up the pace as the contest was closely fought and seemed to be on the table in the championship rounds, but the official judges already had him well ahead. Both fighters suffered minor cuts from head clashes - which luckily played no role for either man in the fight.

On the undercard, Chantelle Cameron (7-0, 5 KOs) broke down and stopped Natalia Vanesa del Valle Aguirre (8-12) in the sixth round of action.

Heavyweight prospect Martin Bakole (11-0, 8 KOs) demolished DL Jones (8-2) in the first round. Bakole scored two knockdowns before the referee waved off the fight.

Id like to see more of this guy. Hopefully he boxes more on The big networks.

Can't wait till this one to upload. Sounds like it was a close but clear win for Taylor.

[QUOTE=Bigblackted44;18890516]A lot of people are high on Ramirez so answer me these two questions, Why did he not want to fight Prograis next? Why does he seem hesitant to join me he tournament at 140?[/QUOTE] Of course Ramirez wanted fight…

A lot of people are high on Ramirez so answer me these two questions, Why did he not want to fight Prograis next? Why does he seem hesitant to join me he tournament at 140?