With all of the turmoil and controversy finally in the past, the World Boxing Super Series super lightweight finals is now set.

“It’s a dream come true. “And the new!” It’s brilliant,” Taylor said of the biggest win of his still improving career. “I can’t believe it.” 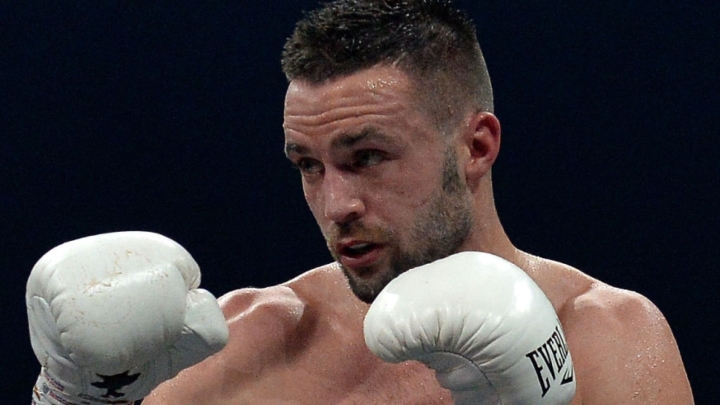 Taylor kept the action at a desired pace and distance early on, parrying from the outside before jumping in with sharp left hands from his southpaw stance. Baranchyk was unsettled and in fact a bit wild with his power shots, although he managed to sneak in an overhand right which Taylor took well.

Despite coming as the defending titlist, Baranchyk was a considerable betting underdog. The early rounds justified that take, although the previously unbeaten Belarusian punched his way back into the fight after falling behind early. Taylor began to slow down in round five, one which saw Baranchyk repeatedly scored with heavy right hands.

Two-way action ensued in a fire fight of a sixth round which saw Taylor’s mettle tested.

He passed with flying colors.

Baranchyk thought he’d turn the tide but grew a touch too overconfident. Both boxers traded hooks, only for Taylor to land first in scoring the first knockdown of the contest. Baranchyk took a deep breath before rising to his feet, only to hit the deck once again. The second sequence came just as the bell sounded to end the Round of the Year candidate, perhaps saving him from a knockout ending but falling farther behind on the scorecards.

It proved a pivotal point in the contest, as Taylor was in full control once the second half was underway.

“I thought it was game over,” Taylor said of the sequence. “Next round, I was picking him off with jabs but never took my foot off the gas.”

The unbeaten Scotsman punched with alarming precision, with Baranchyk fighting through a deficit and fatigue as his mouth was agape as the fight crept into the later rounds.

Taylor was wisely advised by 2016 Trainer of the Year Shane McGuigan to box smart down the stretch, but he instead chose to put on a show in a near flawless round ten. The advice proved far more sound in the 11th, when Taylor was briefly wobbled by a right hand but shook off the blow to regain control.

Hall of Fame and multi-time Trainer of the Year Freddie Roach—who took over as Baranchyk’s head coach just seven weeks ago in place of Pedro Diaz—instructed his charge to knock out Taylor if he wanted to win with three minutes to go. Baranchyk couldn’t grant the wish, but certainly went out swinging as he made Taylor work every second of the final frame in a terrific fight.

Baranchyk (19-1, 12KOs) won the title with a violent 7th round stoppage of previously undefeated Anthony Yigit in their WBSS super lightweight quarterfinals pairing last October.
It threatened to be his last appearance in the tournament, as he was among several fighters who were not paid their contractually promised purses and win bonuses in a timely fashion.

His team had to threaten legal action, ultimately receiving a hefty compensation package for remaining in the tournament and agreeing to defend the title on the road.

It proved to be the end of the road, at least for his title reign and tournament aspirations.

Meanwhile, Taylor (15-0, 12KOs) picks up his fourth consecutive win at SSE Hydro, this one having scored a one-sided 7th round stoppage of previously unbeaten Ryan Martin in this very arena last November to advance to the semifinals round.

The Scottish southpaw will now advance to the finals versus Prograis, who scored a one-sided 6th round knockout of Kiryl Relikh to claim a 140-pound title this past April in Lafayette, La. and was seated ringside.

Oddsmakers have the unbeaten American as an early 2/1 favorite to win the tournament.

Not getting too far ahead of himself, Taylor would like to believe it’s a pick-‘em affair.

“I feel I’m the best, he feels he’s the best,” Taylor stated. “We both did the job to get to the finals. I feel I’ll win the fight quite comfortable, I’m sure he believes the same.”

The bout streamed live on DAZN USA and aired live on Sky Sports in the United Kingdom.

[QUOTE=BOXING-SCRIBE;19759643]And if Taylor wins, I'll do the the same, I will be gracious in defeat[/QUOTE] Cool beans my man.

[QUOTE=Mexican_Puppet;19758616]Man, i will do that , it's easy but it's boring to me Quigg? Excuses He could do abs to Lost weight That was planned[/QUOTE] You will give me your list, it's easy to you. But still refuse to give…

Taylor Vs Baranchyk was a good competitive fight. Taylor displayed boxing skills and patience, Baranchyk proved he not only had power but Heart as well. Great Fight!

[QUOTE=Sid-Knee;19758444]What? What list? I gave it a couple of weeks back you fool. I gave you the top 10 British fighters and their best win. You've refused to do likewise. When did I ever say Zurdo failed weight or that…