Eddie Hearn says he is eyeing a “monstrous clash” between Josh Kelly and Lewis Ritson, which could be the biggest clash in the history of boxing in the North East of England.

Kelly, the world-ranked welterweight, comes from Sunderland and Ritson, the WBA’s No 2 super-lightweight, comes from Newcastle, cities just 15 miles apart but with such a fierce rivalry through football that Hearn has shied away from putting the pair on the same bill for fear of trouble between supporters.

But during an Instagram Live broadcast on Friday, Hearn raised the subject of a fight he “can’t help thinking about” between the pair.

“I can’t help thinking it has all the ingredients,” Hearn said to Kelly. “I feel in terms of the region if you both get to world level it’s a monstrous fight.” 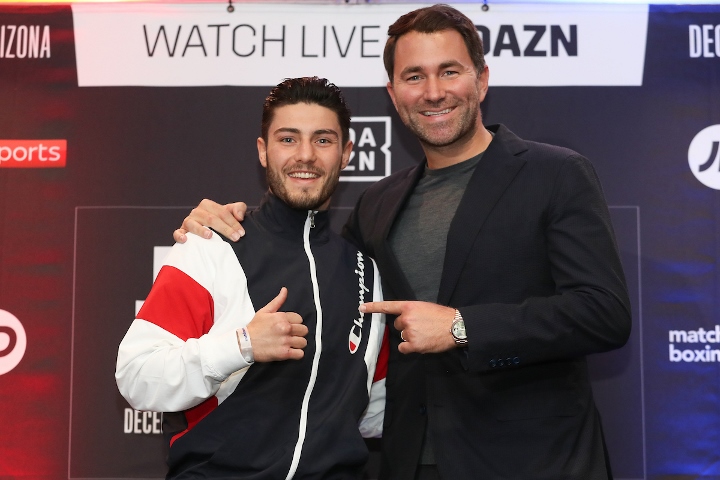 Both Kelly and Ritson have seen big fights postponed because of the coronavirus pandemic. Kelly was supposed to be challenging David Avanesyan for the European title on March 28, a fight that still has to be rescheduled, while Ritson was due to be facing Miguel Vazquez on April 14, which has been pushed back to June 27.

“That sells out any stadium, it sells out Newcastle or Sunderland,” Kelly said of a fight with Ritson. “It’s one for the future. If Lewis wants to move up.

“It’s a no-brainer if we were at the same weight, but I wish him all the best with his career.”

For now, Kelly admitted that he might have to have a whole new training camp when he gets a new date for Avanesyan.

“I was flying (in training) that was the disappointing thing,” Kelly said. “I can’t complain too much because he had the same from me last time, but this was on a much bigger scale.

“I felt I was coming to a good peak and to mimic that camp again could be difficult. It is not like it has been postponed for a couple of weeks, it will be postponed until the summer time.

Ritson, the former British lightweight champion, believes a win over Vazquez could set up a fight with the winner of the fight between Regis Prograis and Maurice Hooker, a fight he believes could be big enough to stage at St James’ Park, the home of Newcastle United. Not that he is taking the Mexican former world champion lightly.

“When I went face to face with him, he seemed massive, his head was really big,” Ritson said. “It’s going to be a tough fight and it is going to be entertaining.

“We had a feeling that if we got past Vazquez we could possibly have the winner of Hooker and Prograis.

“Josh Taylor in No 1, he’s the man. Prograis will get past Hooker. If he gets past Hooker that’s definitely a St James’ Park fight if we can get it made and I’m confident of winning.

“Josh Taylor is the hardest fight [in the division], but if that ever got made I wouldn’t be shying away from it and I wouldn’t be going there to just make the numbers up, I would be going to get stuck in and win.”

“It’s a bit like the Khan-Brook fight, it will always be there,” he said. “Even though me and Kelly haven’t really talked about it, for the North East it would be absolutely massive.

“Even at 147, I walk around a lot bigger than that. I believe there wouldn’t be much in it between me and Kelly [in size]. It’s a great fight for the future.”

Interesting to see how far Matchroom can take this guy. Now he's ranked which is not surprising for a set up but very surprising when considering josh kelly and his ability or inability. A joke of a fighter with no…

[QUOTE=Mammoth;20501847]Fun fighter but not a top 140 lb fighter.[/QUOTE] Yeah he’s too one dimensional. They’ll probably get him a title shot though cause he’s a big ticket seller. He should fight the winner of the Golden Contract tournament IMO. Him…