Serious gatekeepers matter in boxing. They are those fighters who probably won’t win a title but they demand respect anytime they are in the ring. For a young fighter, beating them is a sign of a potentially serious contender.

33-year old Josesito Lopez (36-7, 19 KO), 146 ½, of Riverside, California, is a serious gatekeeper who still finds himself on the fringes of contention. Over ten rounds in the main event on Saturday at the Don Haskins Convention Center in El Paso, Texas, he showed 27-year old Miguel Cruz (17-1, 11 KO), 146 ½, of Lake Mary, Florida, that at the very least, he’s not ready yet. Cruz lost two points to low blows and most of the rounds of the fight en route to his first loss, a lopsided unanimous decision.

The referee was Rafael Ramos. 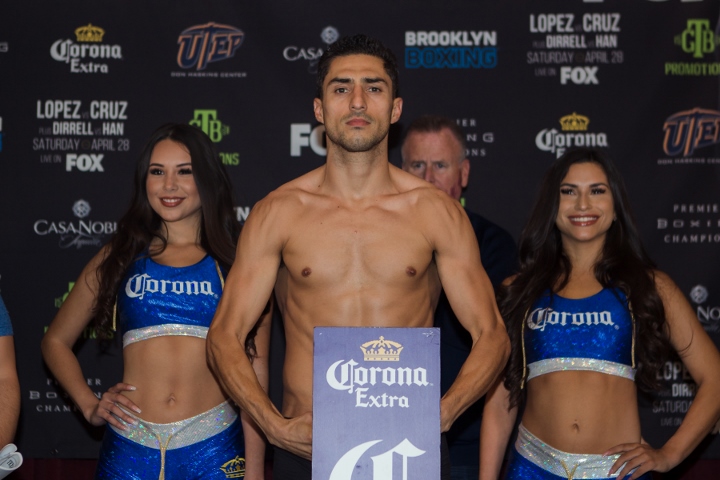 Cruz got off to an efficient start for the first couple rounds, working well off the jab and trying to get to Lopez’s body. It didn’t take long for a big story in the first half of the fight to emerge with Cruz unable to keep his shots fair. He received warnings for low blows and lost points in both the fifth and sixth rounds. Lopez kept his shots up, worked in combination, and never really looked in danger over the second half. Boxing a disciplined, steady fight, Lopez piled up points and left no doubt as Cruz’s corner implored him to do more. Lopez earned a near shutout with twin cards reading 99-89 and another at 98-90.

Lopez entered the night as the WBA’s sixth rated welterweight for his first fight since April 2017. It was his third straight win and the performance Saturday won’t cost him a thing. Lopez has his eyes firmly ahead. “All the welterweights better watch out. I’m the Riverside Rocky and I’m here for some time and I want to fight for a world title.”

Lopez has challenged for an interim welterweight title and a share of the Jr. middleweight crown in his career, suffering stoppage losses to Andre Berto and Saul Alvarez respectively. The current WBA welterweight titlist is Keith Thurman.

Dirrell got off to a god start, dropping Han with a right hand to the head in round one. He continued to pile points through the next three rounds before a memorable tumble at the end of the fourth. Falling forward in a clinch, Dirrell landed on top of Han and both men took swipes at each other in a scene more fitting for MMA.

Han never really got any sustained offense going. He endured plenty of taunting and talk from a Dirrell who was too quick, too sharp, and too good for the limited but tough Han. The final scores were academic at a shutout 100-89 and a twin pair at 99-90.

Dirrell came into the bout rated second by the WBC and seventh by the IBF.

The televised opener featured sudden action in the featherweight division.

29-year old Claudio Marrero (23-2, 7 KO), 127 ¾, of Santo Domingo, Dominican Republic, rebounded from his first stoppage loss by handing someone else their own. A big left hand stunned previously undefeated 27-year old Jorge Lara (29-1-2, 21 KO), 127 ½, of Guadalajara, Jalisco, Mexico and that was all she wrote. Lara was done at just 33 seconds of the very first round. The referee was Rocky Burke.

The card was televised in the US on Fox, promoted by TGB Promotions.

[QUOTE=Mr97kPPVBuys;18718707]Another PR gets an L. I love it. I phuckin love it! 2018 is starting to be a good year. :boxing:[/QUOTE] Yes indeed, alongside that Lara guy that got starched in one round by a scrub

[QUOTE=Boxfan83;18718557][B]Josesito "Riverside Rocky" Lopez!!![/B][/QUOTE] He looked good tonight! Josesito looked much better defensively than ever. The jump to Robert Garcia looks to be a game changer. After the fight Josesito said [B]“I think the biggest difference has been Robert Garcia,”[/B]…

Hopefully they do an Ortiz rematch

Lopez looked in top form and as focused as ever and this is the best he has looked in a long time. Time for another run!