Joseph Parker is Very Pumped Over Deal With Matchroom

The longtime leading promoter of the United Kingdom—whom has since branched out into the United States—has secured the services of former heavyweight titlist Joseph Parker. A news conference is planned for Friday afternoon in New York City, where the Matchroom team is on hand for the U.S. debut of unbeaten heavyweight titlist Anthony Joshua whom defends versus Andy Ruiz this weekend at Madison Square Garden.

Parker’s 15-month title reign ended with a loss to Joshua in their title unification clash last March, but hopes his alignment with Matchroom and DAZN can help propel the New Zealander among the division’s elite.

“If Joseph Parker performs the way we all know he can over these next three fights then he will have a strong case for another shot at Anthony Joshua,” insists Eddie Hearn, Joshua’s longtime promoter whom will now handle the reins for Parker for at least his next three fights, as per the terms of their new deal. “There’s certainly unfinished business there, so this is a really exciting signing for Matchroom.” 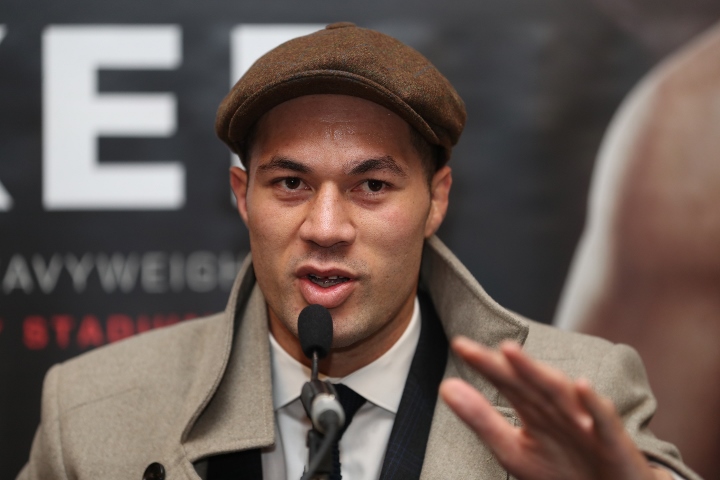 The first fight under the deal will come June 29 on DAZN, with Parker to face former two-time heavyweight title challenger Eric Molina. Their bout will land in Providence, R.I. in supporting capacity to local hero and reigning unbeaten middleweight titlist Demetrius Andrade in a title defense versus Maciej Sulecki.

It will come six months after his last fight, a 3rd round knockout of Alexander Flores last December in Christchurch, New Zealand. The six months between fights matches a career-long inactive stretch for Parker, though a necessary one in figuring out his next move.

“My six-year promotional contract with Duco Events ended on March 26,” noted Parker (25-2, 19KOs), whom outpointed Andy Ruiz—Joshua’s title challenger this weekend—for a vacant heavyweight belt in Dec. 2016, which he defended twice. “It was a wonderfully successful partnership – so much so that David Higgins will always be part of my team, advocating in my best interests in a management capacity.

“Since my contract with Duco ended I have been a free agent, with my team and I spending several months assessing how to best achieve my goal of not only becoming a world champion again, but unifying all of the belts to become the undisputed heavyweight champion of the world.”

No better way than to sign with the company who holds all but one of the division’s major hardware. The lone other option would have been to position himself for a shot at unbeaten titlist Deontay Wilder, but would put him deep in a long line of awaiting challengers.

Instead, he believes conducting new business with an old friend will get him to where he needs to be at a much quicker pace.

“Ultimately we decided that the best option was to partner with Eddie Hearn and Matchroom Boxing,” explained Parker, who fought on Matchroom shows in back-to-back decision defeats to Joshua and top heavyweight contender Dillian Whyte. “We believe the three-fight deal that we are announcing today will be the start of a long and successful partnership.”

lol maybe should have waited now that pbc ruiz has those straps.

[QUOTE=Mammoth;19785834]Please no Joshua rematch[/QUOTE] Why? A rematch is needed with a decent ref

[QUOTE=Oldskoolg;19785964]Are they mad at my post? Most of these obsessive types are on my ignore list but I bet at least a couple of them kicked off over my post clowning their g-d Hearn[/QUOTE] It would potentially help your cause…