Joseph Parker: Tyson Fury is 'Number One' in The Division

MGM Grand, Las Vegas, NV - Joseph Parker was on hand in Las Vegas as his training stablemate Guido Vianello had his public workout for his upcoming fight against Cassius Anderson.  The bout takes place on the Tyson Fury-Otto Wallin undercard at the T-Mobile Arena.

Fury is a big betting favorite going into the fight. Some Las Vegas sports books have him as high as a 25-1 favorite. Wallin is an unbeaten fighter but hasn't fought anyone close to the level of Fury.

Parker believes that Wallin may give him some issues early on but expects the lineal heavyweight champion to eventually figure out the Swedish fighter and dominate the fight.

"I think it is one of those fights where - I have always said before that I think Tyson Fury is #1 in the division - I haven't seen a lot of Otto. I think he is ranked #4 and is a southpaw and is undefeated. Fury for me is #1. I think he is the best. I think he is going to put on a great performance like he did in the last fight," Parker told BoxingScene.com. 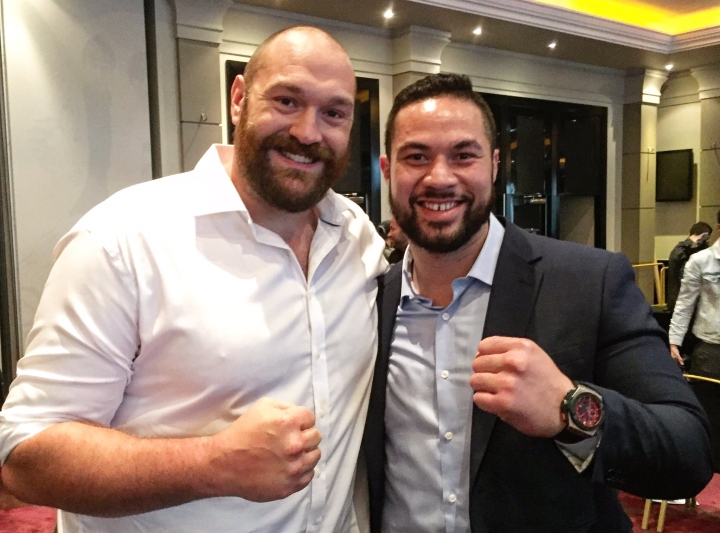 The fight Parker was referring to was Fury's second round knockout of Tom Schwarz on June 15th.  Schwarz appeared in over his head early on and many people view Fury's fight against Wallin as another mismatch.

Parker admitted that he doesn't know too much about the 6'5" Wallin but believes that he is a step up in class from Schwarz.

"I haven't seen much of him but he has better pedigree so I think he will give a little more. He is a southpaw and is probably different than what Fury is used to," Parker explained.

Parker returns to the ring on October 26th in the United Kingdom against Dereck Chisora on the Regis Prograis-Josh Taylor undercard.

Parker knows the score. Ask any pro about Fury and they'll say the same.

Well, I know sour sure that Fury is as good as Wilder. It is on his record.

Wonder why Parker has such an inferiority complex when it comes to Fury. There's no friends in this game, I would never want to see them get it the ring as Parker would be in awe and surrender meekly.

[QUOTE=TJCombo1995;20050893]Tyson probably IS the best although these powderpuff opponents won't help confirm such a status. That being said in that rematch with Wilder he won't find it so easy to win if Wilder fights on the back foot like he…

[QUOTE=TJCombo1995;20050893]Tyson probably IS the best although these powderpuff opponents won't help confirm such a status. That being said in that rematch with Wilder he won't find it so easy to win if Wilder fights on the back foot like he…