February 27th is the date for the all New Zealand showdown pitting Joseph Parker (27-2) against longtime rival Junior Fa (19-0). The fight will take place at the Spark Arena in Auckland and will be streamed live in the United States and several other countries on DAZN. (photo by Photosport)

The 31-year-old Fa will be taking a big step in class when he steps in the ring against Parker who will be by far his most accomplished opponent in the professional ranks.  Fa went 2-2 against the former WBO heavyweight champion in the amateur system and there is no love lost between the two.

Parker's trainer Kevin Barry expects Fa to enter the ring with a lot of confidence and expects a tough fight.

"Junior Fa is a big strong guy who has developed his skillset over the last 4 years. He has been brought along well by his team and with a 19-0 record and a #6 world ranking with the WBO, he has solidified his position as a real prospect in the heavyweight division. The time that he has spent in training camp with Deontay Wilder has given him more confidence as he continues to move up the rankings," said Barry. 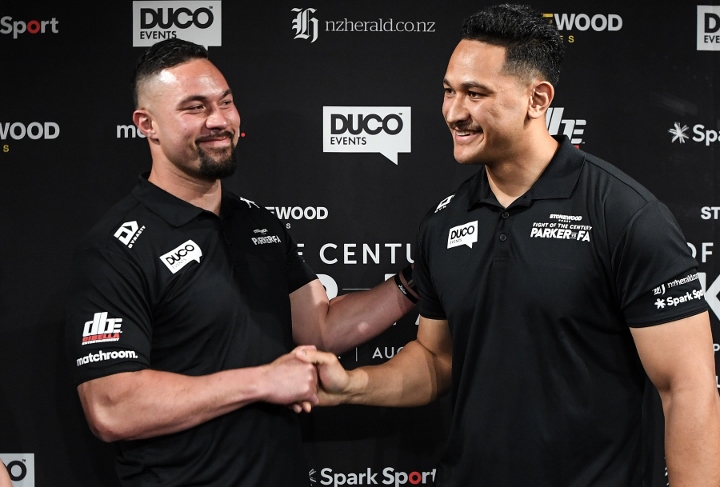 New Zealand has done a much better job of combating the COVID-19 pandemic than most of the world and currently has only a few scattered cases.  That success means that unlike most sporting events worldwide, Parker-Fa will be able to have a big crowd on hand.

"The fight in Auckland is at the Spark Arena. The same venue that Joseph Parker beat a 29-0 Andy Ruiz to win the WBO heavyweight title in 2016. This venue has special significance for Joe and our team. We are extremely fortunate in New Zealand that the country is at level 1. Recently we had a 40,000 plus crowd at a rugby game between New Zealand and Australia," Barry told BoxingScene.com.

"The Spark Arena holds an indoor capacity of 12,000 people. For such a big NZ fight it is only fitting that with the hype, build up, and the atmosphere, that a big crowd is in attendance. Watching many fights and also being part of events of late where the fighters have been in a bubble and fighting in front of a few dozen people, it is so strange and different without the atmosphere and crowd noise. A lot of fighters feed off the crowd and the atmosphere in the room. This has been missing in many world shows this year. Fortunately, the experience will be complete in Auckland New Zealand for the Parker versus Fa fight."

There is a lot wrong with the fight game right now, and that fuels the fire of disguest is all. Going to the Middle East was being done before Covid right ? So you start exporting your fights for the…

[QUOTE=DougalDylan;20974280]Bad timezone for UK PPV I'd have thought. Middle East you may be able to do the same crowd with a site fee and keep the UK PPV numbers They are talking the possibility of 2 million (with SKY and…

[QUOTE=landotter;20977630]Your point is valid, but I do think it is worth pointing out it is not anywhere near the worst era. Look who Larry Holmes had to settle for when he was HW champ. Then go back and look at…

I don’t mind this fight for Parker due to the domestic rivalry from way back, and the fact that it really is the best time to fight your fights in your own country with the pandemic around. Better than all…

[QUOTE=57Blues;20974147]Heavyweight division is not much right now and this shows it as do past fights. Not a knock divisions go thru this for years at a time.[/QUOTE] Your point is valid, but I do think it is worth pointing out…