On October 26th Joseph Parker will take on Dereck Chisora at the O2 Arena in the United Kingdom.

A press conference was recently held to announce the fight and the Regis Prograis-Josh Taylor main event.  Chisora was present at the press conference while Parker was training in Las Vegas. The fact that Prograis-Taylor is the main event struck a nerve with Chisora who has headlined at the venue on several occasions. Chisora threatened to pull out of the event if he didn't receive top billing.

"Either put me in the main event or else pull me out of the f****n' show," Chisora ranted. 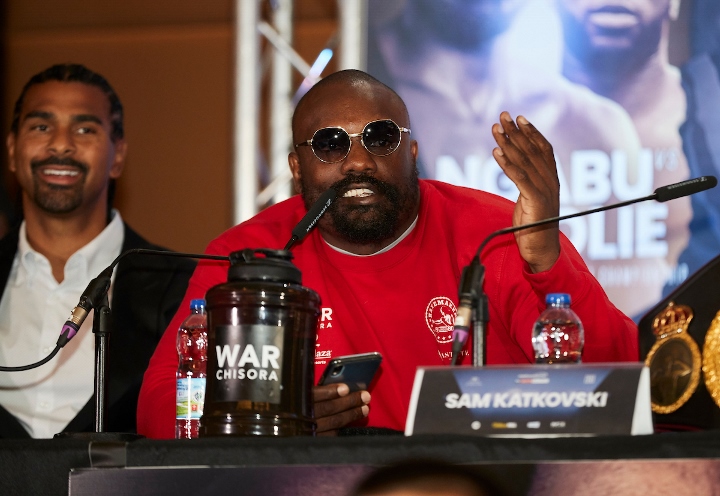 Parker was on hand in Las Vegas as fight week kicked off for the upcoming Tyson Fury-Otto Wallin showdown that takes place at the T-Mobile Arena.

He expects an explosive fight when he steps in the ring against Chisora.

"Listen, I am excited about it. That is a fight that we have been trying to make for a long time. It is good that we have the fight locked in now on October 26th. He is going to come forward. He comes for war and he throws a lot of punches, combinations. I think I have the right style. Fighting guys like him bring out the best in me," Parker told BoxingScene.com.

As for Chisora's tirade, Parker said that he could careless who headlines the fight and is soley focused on the fight itself.

Parker has headlined several cards in his career and at this point in time he is focused on picking up a victory and moving on to bigger opportunities.

"Prograis and Taylor are fighting for a unification and it is not up to us. It is up to the promoters to decide who is the main and who is the co-main and so on.  If we were on a different card by ourselves of course we can be the main event. We attract a lot of fans and supporters but you can't take that away from the guys fighting in the main event. Those guys have belts, it's unification. I don't care where I fight. I don't care if I am the main or the co-main.  Bring it on," said Parker.

[QUOTE=factsarenice;20052193]Chisora lost 20% of his fights, thinks Ali is a piece of shlt, lost his boxing licence for his BS aditude. As for Wlad, Klitchko put a 12 round beating on him and Haye never had a brawl, he punched…

[QUOTE=Joel Osteen;20053930]That's because most countries don't care about boxing. Pound for pound or any other measure, Your country is crap at boxing.[/QUOTE] You just sound like a bad troll now. The world is full of those.

[QUOTE=factsarenice;20051202]Seriously, when Chisora called a trophy in honor of Mohamad Ali a piece of shlt and that nobody cares about Ali.... he lost me. Any boxer, boxing fan, anyone... that supports this parasite is either a raciest piece of crap…

[QUOTE=Joel Osteen;20053930]That's because most countries don't care about boxing. Pound for pound or any other measure, Your country is crap at boxing.[/QUOTE] That’s a pretty dumb generalisation, especially in a thread discussing heavyweights. Up until recently it was universally regarded…

[QUOTE=Roberto Vasquez;20052591]We like a fighter. Someone who tries no matter what. We actually do really well at boxing for such a small country. Pound of pound Britain has got to be in the top 3 countries in the world.[/QUOTE] That's…