Joseph Parker on Fighting Usyk: I'd Take it With Both Hands!

Parker is currently training in Las Vegas training for his next fight, scheduled for February 29 in Texas, as part of the Mikey Garcia-Jessie Vargas undercard. Parker's opponent has yet to be named.

The fight with Usyk would depend on Anthony Joshua being stripped or vacating the WBO world title. 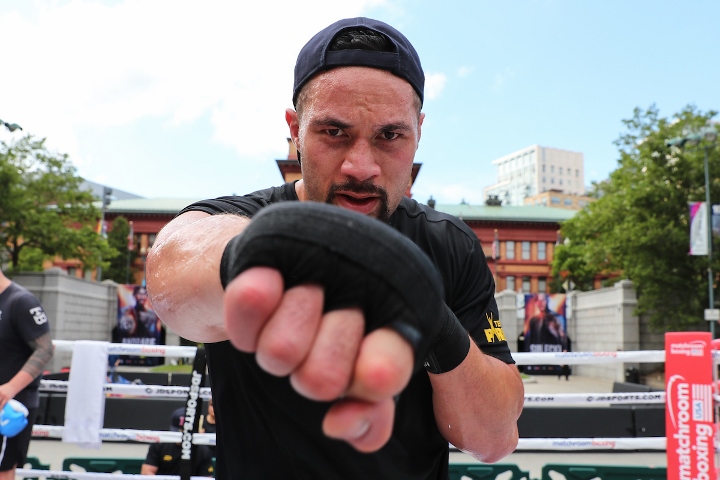 Parker is ranked at number two by the WBO, so the sanctioning body would likely order a fight between him and Usyk to collide for the vacant title.

"I'd love the opportunity to fight Usyk. He's a top fighter with good skills, good movement and I'd love to test my skills against him if it's for the world title," Parker told Helen Yee Sports during a break in training in Vegas.

"There's a lot of things that need to happen … but if the opportunity arose, I'd take it with both hands. You never know [if Joshua would vacate the belt], I just have to be patient and see what happens. I think they might but you never know with boxing, things change just like that."

Usyk made his heavyweight debut last year, with a TKO of Chazz Witherspoon in October, but the victory was not overly impressive.

"I don't think it was the best that he has shown but maybe it was a good welcoming fight to the heavyweight division and adjusting to the weight. He got the win which is the main thing and he will improve," Parker told Helen Yee Sports.

Parker has been out of the ring since last June, when he stopped Australian veteran Alex Leapai.

I prefer Parker if it happens. Parker is experienced heavyweight, Whyte barely survived against him. He also beat Ruiz. Usyk is still cruiserweight with very little experience at hw. I like Usyk`s skills, but I think he is there just…

Usyk doesn't want a belt he'd have to fight Parker for and possibly lose for less money. He'd rather lose to AJ for a fat wad of cash instead. If he were forced to fight Parker, i expect he'd make…

Nobody is afraid of Usyk or bothered about his overrated boxing skills. It is only Tony Bellew that seems to be making him out, to be the second coming of Evander Hoyfield.

Usyk will win. Parker is used to losing

[QUOTE=VislorTurlough;20320880]Funny you don’t hear chickens**t Whyte calling to fight for the vacant belt. Cuz the cheater only reads ffom puppet master Eddie’s script.[/QUOTE] Except whyte went off script and ran from AJ and 4 world titles when Eddie sent him…