Former world champion Joseph Parker is hoping that a deal is finalized for a contest against the always dangerous Derek Chisora.

Parker's promoter, David Higgins, is currently speaking with Eddie Hearn regarding the possibility of a fight with Chisora on April 20th in London.

Chisora has been out of the ring since last December's brutal knockout loss at the hands of Dillian Whyte at the O2 Arena. 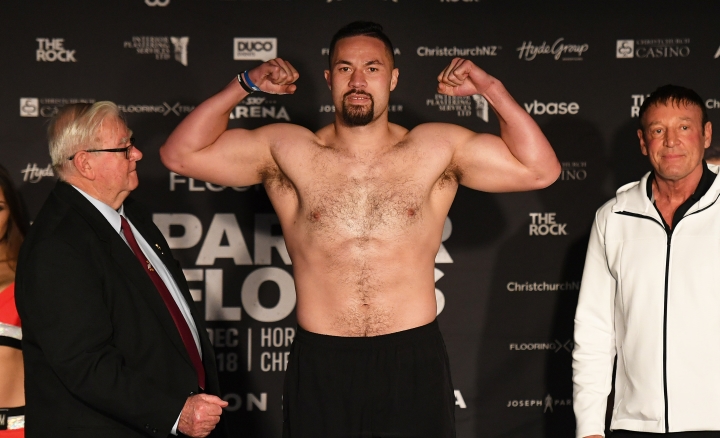 Parker had mixed fortunes in 2018 - after losing a twelve round decision in a heavyweight unification with Anthony Joshua.

And then he was close to knocking out Dillian Whyte in the final round of their bout - but he gave up too many rounds and lost a decision.

He closed out the year with a knockout victory over Alexander Flores.

Chisora, who was leading on the cards when he Whyte knocked him out, recently announced that he hired experienced trainer Dave Coldwell.

"It's our priority option," Parker confirmed to Sunday Herald. "I said to David that I want to lock in something very soon because if I lock it in tomorrow it will give me nine weeks of training. I need a minimum of seven weeks in Vegas and two weeks in the UK so it's very close to happening.

"He's a dangerous fighter. It's a risky fight. He puts on a lot of pressure and throws a lot of punches. With the last fight he had against Dillian Whyte, he was leading the fight before he got knocked out.

"Fury and [WBC champion Deontay] Wilder are busy. Joshua is going to fight Big Baby [Jarrell] Miller. David Price has got a fight. Lucas Browne has got a fight. The only other person at the top is Luis Ortiz but I think he's going to be signed up for a fight soon.

"For me, looking at the top 10 or 15 in the world, Chisora is right up there, the only one that is free and the only one willing to take the fight."

[QUOTE=Jkp;19520602]Parker is clearly better than whyte. It took an illegal head but KD, for whyte to have a chance against parker. And whyte still finished the fight flat on his back, begging for final bell. But whyte is not top…

Another fight to boost the confidence and also to break the streak of losses in the UK that was building. Good fight for him in that sense but one I expect him to come through.

[QUOTE=Squ□redCircle34;19519365]Should’ve been Ortiz or Povetkin! But I guess he deserves a couple gimmie fights to get his confidence back after back to back losses! I just don’t think Parker has what it takes to be a top 5 heavyweight with…