Jackson took control in the second half of his eight-round junior middleweight fight against Derrick Colemon Jr. and won a unanimous decision at 2300 Arena. The unbeaten Jackson convinced all three judges – Dewey LaRosa (78-74), Alan Rubenstein (80-72) and Steve Weisfeld (77-75) – that he won the first of four fights Showtime televised as part of the network’s “ShoBox: The New Generation” series.

Rubenstein scored all eight rounds for Jackson, a Greensboro, North Carolina, native who improved to 16-0 (12 KOs). Detroit’s Colemon, 20, lost for the first time in his brief pro career (11-1, 8 KOs). 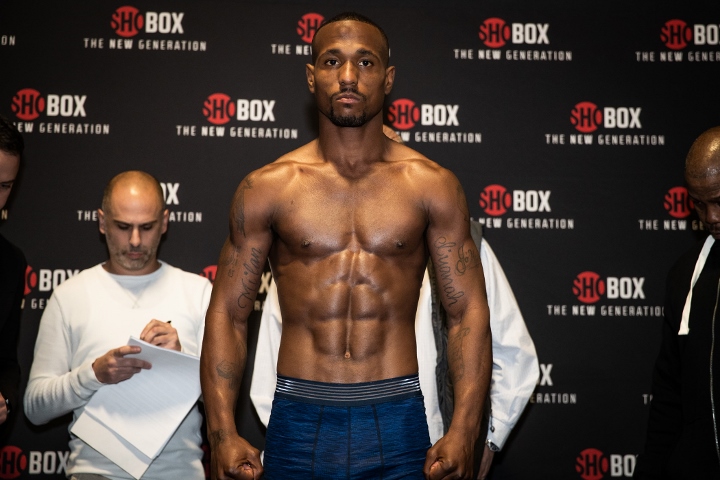 Jackson, 31, had a high knockout ratio entering this bout, but like Colemon, had built his unblemished record against a low level of opposition.

Jackson pressed the action and out-landed a fatigued Colemon throughout the eighth and final round. By then, Jackson was in complete control and only could’ve lost by knockout.

Jackson connected with a hard left to Colemon’s body early in the seventh round. Later in the seventh, Jackson caught Colemon with a left uppercut that snapped back Colemon’s head and made him move away from Jackson.

Coleman fell backward, into the ropes, after tripping over Jackson’s leg with about 35 seconds to go in the sixth round. Jackson spent the rest of the round trying to land lefts and rights to Colemon’s body.

Jackson’s jab was effective early in the fifth round, when Colemon came forward, yet didn’t land clean punches. Two overhand rights by Jackson got the crowd’s attention just before the midway mark of the fifth.

Colemon landed a right hand several seconds later, which caused Jackson to hold him. They then got tangled up and fell out of the ring, on to the ring apron, with 1:22 to go in the fifth round.

Colemon and Jackson quickly got back into the ring and the action resumed.

A short, right upper by Jackson caught Colemon in the fourth round. Colemon connected with a left hook to the side of Jackson’s head later in the fourth, but Jackson took that shot well.

Two overhand rights by Colemon got Jackson’s attention in the second half of the first round.

Really happy for Jackson. I've seen him fight 3 or 4 times in Greensboro. This was a big win for him.