After coming in a pound overweight Monday, Joseph Adorno never made it to the scale Tuesday in Las Vegas.

The 21-year-old lightweight was supposed to weigh in a second time Tuesday afternoon, but Adorno felt ill and withdrew from his scheduled eight-rounder against Alexis del Bosque. ESPN was supposed to televise the Adorno-del Bosque bout as part of a five-fight telecast from MGM Grand Conference Center in Las Vegas.

Adorno (14-0-1, 12 KOs), of Allentown, Pennsylvania, officially weighed in at 136 pounds Monday, one above the contracted maximum. Dallas’ del Bosque (17-5, 9 KOs) stepped on the Nevada State Athletic Commission’s scale at 134¼ pounds. 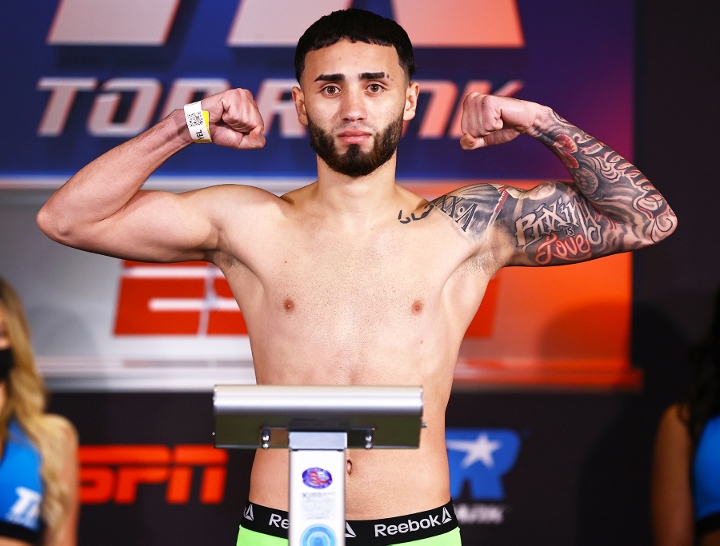 Their teams made an agreement with the NSAC that Adorno couldn’t weigh more than 142 pounds at another weigh-in Tuesday afternoon. Adorno didn’t weigh in a second time because he was sick.

Adorno-del Bosque was the second fight ESPN and promoter Top Rank lost Tuesday afternoon, though it wasn’t related to a failed COVID-19 test. Jamel Herring, the WBO junior lightweight champion, revealed on social media that he tested positive for the coronavirus last week and that his title defense versus Jonathan Oquendo has been postponed indefinitely.

Without Adorno-del Bosque, ESPN will proceed Tuesday night with a four-fight telecast.

The boxing card felt light after this fight was taken down. I hope for a speedy recovery to Joseph Adorno. :boxing:

[QUOTE=Kannabis Kid;20625373]Then don't even bother reading about it then dude Franco vs Moloney is a solid scrap if you think otherwise I don't know what to tell you. Sucks this fight got canceled seemed like it was going to be…

[QUOTE=rudy;20625247]Not going to wake up and watch this crap terrible[/QUOTE]Then don't even bother reading about it then dude Franco vs Moloney is a solid scrap if you think otherwise I don't know what to tell you. Sucks this fight got…

Not going to wake up and watch this crap terrible