Ramirez already held the WBC super lightweight title and with the victory added the WBO belt to his collection.

The plan was for Ramirez to return to the ring in November but that plan changed when he had surgery in the middle of August. 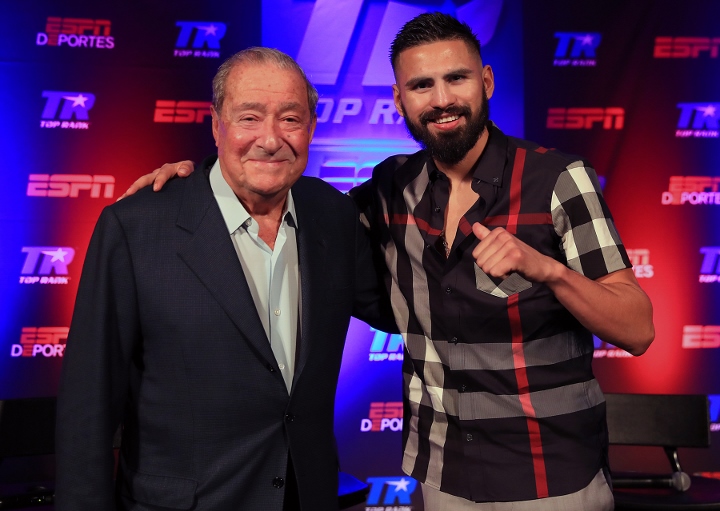 Top Rank CEO Bob Arum said that Ramirez's left hand had been bothering for quite some time and that the new target date for his next fight is Super Bowl weekend.

"Jose Ramirez hurt his again and this time I got him to see the top hand doctor in the country, Dr. Steve Shin in Los Angeles. He did (Vasiliy) Lomachenko. He's done all of my fighters. He is treating the hand. He said if we pushed it that Jose could back in December but that would be pushing it a little bit and to put him back in January - well he's Mexican so he celebrates Christmas and New Years so we are looking to have him go in February on the Saturday preceding the Super Bowl," Arum told BoxingScene.com.

Part of the responsibilities of being a unified champion is having to fulfill multiple mandatory obligations.  His WBC mandatory is Victor Postol and Jack Catterall is his WBO mandatory.

Arum said that the plan is for Ramirez to fight Postol first and then Catterall. If everything goes well he would then like to make a fight against the winner of the October 26th Regis Prograis-Josh Taylor World Boxing Super Series finale.  The winner of Prograis-Taylor will hold the WBA and IBF super welterweight titles so an undisputed champion could be produced by the end of 2020 if everything falls into place.

"I don't know exactly where the site wil lbe but he is obligated to do a WBC mandatory against Postol and then he will do the WBO mandatory versus the English fighter and then hopefully we will be ready to fight the Josh Taylor-Regis Prograis winner," Arum stated.

So Ramirez cannot fight until next year because of an injury and Arum gets blamed ?!?! If Postol has anything left and is still ambitious I expect him to give Ramirez problems.

[QUOTE=Vodkaholic;20052319]It clearly said Ramirez hurt his hand and even coming back at December would be too soon. Not Ramirez fault the wbc has postol as a mandatory[/QUOTE] Said what I said.

postol then catteral is good stuff. real good stuff. ramirez has turned out to be a dam good champion and given us some really good fights. postol fight very risky. i cant wair.

[QUOTE=Cigar;20052206]Is this a joke??? Superbowl weekend??? That's way too far out. It's not even an intriguing matchup. Even at like 90 years, Bob Arum will do anything to get blood from a stone and draw things out. Well...people in the…