Coming in, Zepeda won seven in a row since suffering a two round loss to Terry Flanagan in July 2015. In that bout, Zepeda dislocated his shoulder and could not continue beyond the second round.

Ramirez was in action back in September, when he won a dominant twelve round decision over undefeated Antonio Orozco. 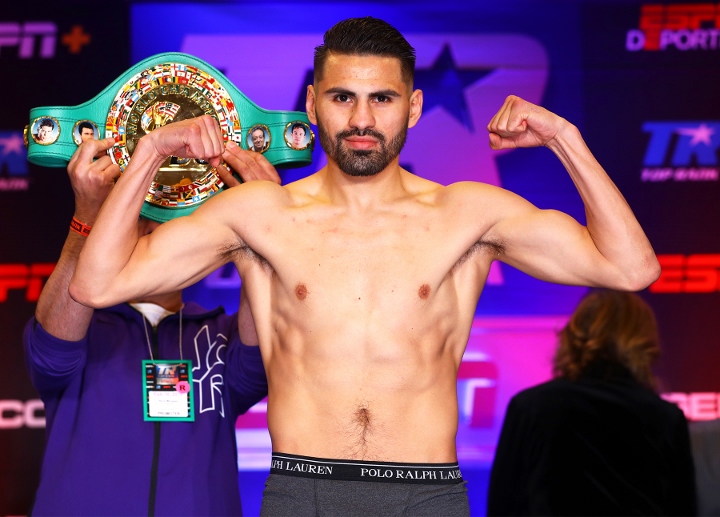 The fight had an ironic twist, with Ramirez now being trained by Robert Garcia. And Zepeda was being coached by Freddie Roach, who eleven months ago took Ramirez to a world title.

The fight started with Zepeda using his jab, using movement and landing counters. Ramirez was trying to figure out the southpaw style of Zepeda. In the second, Zepeda continued to control the fight with his boxing ability. Ramirez was able to battle back in the third, as he rallied in the final minute with combinations.

Ramirez continued to press in the fourth. There was a clash of heads that created a cut on Ramirez around the right eye, but the referee ruled it as a cut caused by a punch.

Both had moments in the fifth, with Ramiez landing the harder punches. Zepeda had a much better sixth, when he went back to his boxing from the long range. There were numerous head clashes as the fight played out. Ramirez did most of the punching during the seventh, as Zepeda was playing defense.  Ramirez rallied with a lot of punches in the closing moments of the eight. A cut opened up under the left eye of Ramirez.

There was good punches by Zepeda early in the ninth, but he allowed Ramirez to outwork him with the bigger shots to the head and body. Zepeda made things close with his boxing skills in the tenth, while Ramirez was pressing hard. Zepeda started to rally with punches during the eleventh, making things tough for Ramirez, who was missing a lot of punches.

In the twelfth, Zepeda was boxing well and landing solid shots, but allowed Ramirez to close strong with a rally of combinations in the closing moments.

Ramirez in his last 3 fights has fought better fighters than Prograis has ever faced. Not his best fight but he can box better and will

Accept the ref in the final round trying to save Zapeda from getting knocked out by separating them when Ramirez is throw vicious shots as if they were holding or something. The red needs to be disciplined that is just…

Anyone got a link to good quality video of this fight and the Beltran one? Would really appreciate it if someone does. I don't have ESPN in my country unfortunately.

[QUOTE=jas;19503887]Prograis would definitely beat Ramirez imo after seeing that last night[/QUOTE] My same thoughts. He simply gets hit too much.