Jose Carlos Ramirez is very familiar with the practice of doing his part to help right any wrong.

The unbeaten, unified junior welterweight titlist has used a healthy portion of career as a platform to raise awareness to the ongoing water drought in his Central Valley home region in California, championing the cause long before boxing labeled him one in the ring.

Having risen to that status more than two years, comes the importance of carrying yourself to a higher standard. That means going with the flow through good times and bad, particularly when the same bout suffers back-to-back postponements for the same reason. It’s where Ramirez (25-0, 17KOs) presently resides, having been forced to end training camp for a mandatory title defense versus Viktor Postol without an actual fight to show for it.

“I sincerely understand the importance of staying healthy,” Ramirez told BoxingScene.com and other reporters during a recent online chat moderated by the World Boxing Council (WBC). “I understand the decision made by the state. It’s the second training camp that it’s happened to me for the same fight.

“For my part I’m going to do my best to stay focused and stay disciplined. Most importantly, I’m going to stay healthy. Once we get this thing under control we can move on with our lives. We can give the people entertainment and put smiles on their face with what we create in the ring." 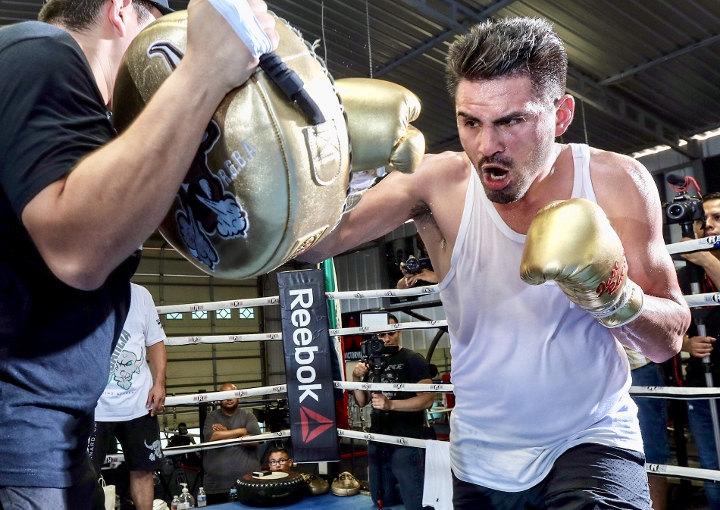 Ramirez’s bout with Ukraine’s Postol—a former titlist and the WBC’s mandatory challenger—was due to take place this past February in Haikou, China, only to be pushed back due to an early outbreak of the coronavirus disease (COVID-19) which has now developed into a global pandemic.

The spread into the United States forced the second postponement, with his rescheduled bout to have come May 9 at Save Mart Arena in his home region of Fresno, California. Ramirez was one of the last active stateside boxers to remain in full training camp, until receiving word from his all-star team—which includes Hall of Fame promoter Bob Arum, manager Rick Mirigian and head trainer Robert Garcia to close up shop and head home to his family in Avenal, California to await further instructions.

“I understand it as an athlete and as a human being,” notes Ramirez, who in his most recent bout stopped Maurice Hooker in the 6th round of their title unification bout last July. “A lot of comments have been very positive. It’s worth the wait. Hopefully, an undisputed fight against Josh Taylor [can come] very soon. For my part, I’m going to stay active in a very precautioned way.”

Just get the Taylor fight signed! A double header featuring Benavidez Vs Smith would sell well...

[QUOTE=EDDIE SPERM;20505954]Should've signed w/ Al Haymon ![/QUOTE] But Josh Taylor is with Top Rank you eejit, then Haymon would stop the fight from happening.

[QUOTE=HaymonzPlanet;20505684]FEEL BAD FOR JOSE HE HAS HAD 2 TRAINING CAMPS CANCELLED OR POSTPONED... ARUM THE CLOWN SHOULD NOT HAVE TOLD HIM HE CAN FIGHT IN A STUDIO SMH.... :kabong:[/QUOTE] Should've signed w/ Al Haymon !

FEEL BAD FOR JOSE HE HAS HAD 2 TRAINING CAMPS CANCELLED OR POSTPONED... ARUM THE CLOWN SHOULD NOT HAVE TOLD HIM HE CAN FIGHT IN A STUDIO SMH.... :kabong: