Jose Ramirez: I Want Unifications, I Might Give it a Shot at 147

WBC junior welterweight champion Jose Ramirez (24-0) had a tough out on Sunday at the Save Mart Center in Fresno, when he won a twelve round majority decision over Jose Zepeda before a crowd of 14,034.

“I knew it was a close fight,” said Ramirez to the Fresno Bee. “I think the championship round (12th) is where I came out and made the difference.”

Ramirez clinched the win in the twelfth round, which he won on all three official cards. 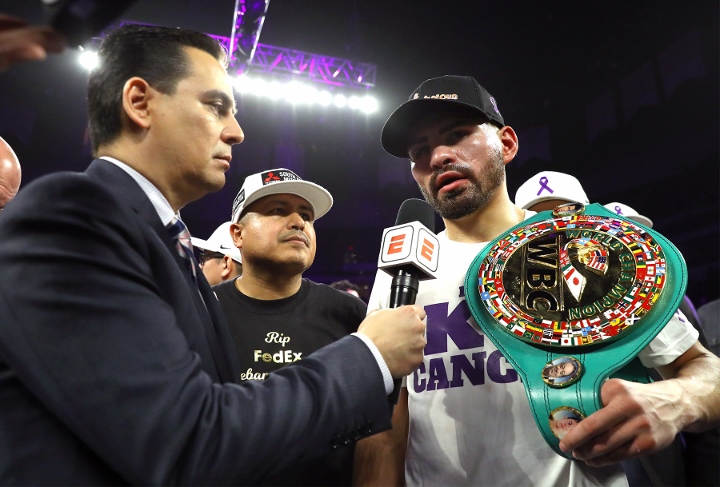 During the contest, Ramirez suffered the first cut of his professional career after clashing heads with Zepeda.

“I really didn’t know how big it was,” Ramirez said. “It did feel at the end of the fight, blood was kind of dropping into my right eye, but I kept on putting that pressure and kept fighting through that adversity.”

Ramirez’s former trainer Freddie Roach, who was in Zepeda’s corner, gave a lot f praise to his former pupil.

“I couldn’t keep my fighter in the center boxing all the time,” Roach said. “Jose’s pressure was so great and he’s so strong coming forward. He did get him to the ropes in the corner and caught him a couple times and caught him with a big body shot and hooks and that’s one of his favorite weapons.”

Now Ramirez wants the big fights, and he's even willing to test the waters at the welterweight limit.

“I want champions. I felt like I beat the top contenders, now it’s time to go unify. I might give it a shot at 147," Ramirez said.

One possibility is a unification with WBO champion Maurice Hooker, should Hooker retain in March.

And Top Rank's CEO Bob Arum has mentioned the idea of matching Ramirez against WBO welterweight champion Terence Crawford in the future - but that contest would likely not happen until at least 2020 at the earliest.

I wish one reporter, just one, would ask Ramirez if he really wants to unify then why did he not enter the WBSS tournament?

"And Top Rank's CEO[B] Bob Arum has mentioned the idea of matching Ramirez against WBO welterweight champion Terence Crawford[/B] in the future - but that contest would likely not happen until at least 2020 at the earliest." That's a horrible…

[QUOTE=Bmore18;19505716]Yea, I dont want to see this, but TR positioning him as a viable opponent for Crawford (mismatch anyway) after he loses at 140 and needs to move up.[/QUOTE] No he can't beat Crawford, but Top Rank has good 147…

Ramirez is full of ****, and this is getting ridiculous. Mo Hooker is on DAZN, Top Rank sidestepped the 140lb WBSS that currently hosts the IBF, WBA, and real WBC champion, and Ramirez isn't fighting Crawford all that soon either.…