Jose Ramirez: I Didn't See The Taylor Fight, Apparently There Was Nothing To See

Clearly, the rivalry between unified titlists Jose Ramirez and Josh Taylor will have to be settled in the ring as neither were particularly impressed with what the other had to offer in their most recent ring appearances.

Less than a month after Ramirez turned away a stiff challenge from former titlist Viktor Postol, Scotland’s Taylor took on a mandatory title defense of his own. The result was far more explosive, though met with far more scrutiny.

A 1st round knockout of Thailand’s Apinun Khongsong (16-1, 13KOs) on Saturday did less to establish (or reaffirm, depending on your viewpoint) Taylor’s place atop the 140-pound division than draw attention to the flimsy process that goes into assigning mandatory contenders. Khongsong came into the fight with a thin résumé but a big reputation as a hard puncher, although the difference in class was evident from the first punch thrown on Saturday. 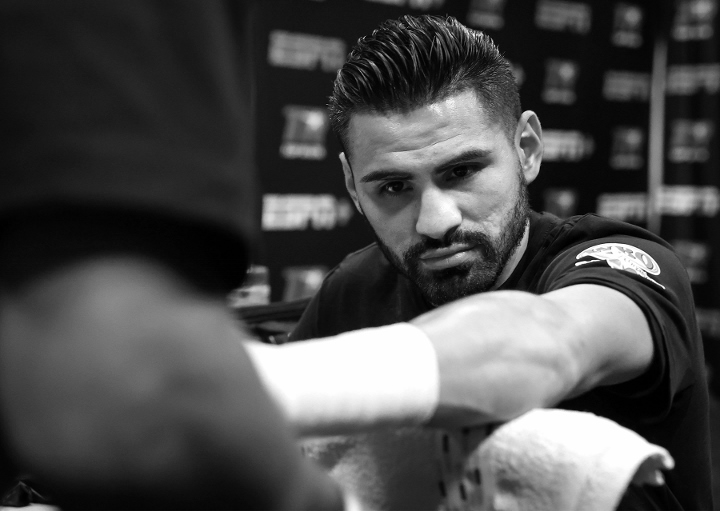 Needless to say, Taylor’s main divisional rival wasn’t too taken aback by what took place this weekend in London. In fact, it wasn’t even his radar.

“I didn’t see the fight but apparently there was nothing to see,” Ramirez (26-0, 17KOs) told BoxingScene.com.

His team did happen to catch the action on ESPN+, watching just enough to criticize the mismatch.

“This was the worst fight I have seen,” Rick Mirigian, Ramirez’ career-long manager insisted to BoxingScene.com. “If [Top Rank VP of Operations] Carl Moretti landed that left or even [Hall of Fame promoter] Bob Arum the same thing would have took place.

“I hope he has that false confidence going into the next fight.”

There has come growing demand for an undisputed showdown between the pair of unbeaten and unified titlists. Ramirez is currently saddled with the burden of having to negotiate terms for another mandatory challenge, this one versus WBO number-one contender Jack Catterall (25-0, 13KOs) of Chorley, England.

Arum is on record claiming a willingness to have Ramirez vacate the title in order to next make that fight happen, although recently revealing to BoxingScene.com a hoped-for process which would allow for some leeway from the Puerto Rico-based sanctioning body. Top Rank promotes Ramirez and Taylor.

Both boxers are clearly on board with the fight. Taylor (17-0, 13KOs) called for the fight immediately after his win over the weekend. Ramirez is equally as eager to move towards a scenario that would next crown a true lineal junior welterweight king.

“I’m waiting to start negotiations between camps and willing to do my part to make the fight happen next,” insists Ramirez, who has made four defenses of at least one title since winning the WBC belt in March 2018.

There remains some work to be done in sorting out business with the WBO, whose title Ramirez won in a 6th round knockout of Maurice Hooker last July in Arlington, Texas. The deadline has expired to negotiate terms for a mandatory defense versus Catterall, although a purse bid hearing has yet to be ordered.

For now and until they hear otherwise, job one will be to move towards a showdown with Taylor early next year.

“I'll be speaking with Top Rank Monday and start that process,” notes Mirigian.

Nothing to see because Taylor did what he was supposed to do, right? I favor Taylor over Ramirez simple because Taulor can do a lot more. Fight inside or out. Throws punches in bunches and has the stamina to go…

There’s going to be a lot of disappointed Ramírez fans when they fight Taylor is a level above him. Only had 17 fights too and still getting better. Ramírez has had almost 30 fights and probably didn’t beat Postol, who…

It’s going to be sweet with Ramirez grinds down and stops the Scottish Yaxley-Lennon supporter! Oh the irony...