Jose Ramirez: I Pulled Off The Win in Championship Rounds

Jose Ramirez was faced with the toughest test of his career. Jose “Chon” Zepeda was slick, slippery, and would not give in. But it was a late rally in the championship rounds that pushed Ramirez (24-0, 16 KOs) to a majority decision victory as he retained his WBC super lightweight title for the second time in front of 14,034 screaming fans at the Save Mart Center.

“He was a very a tough and smart southpaw. He came well prepared," Ramirez said. "He kept a good range and distance. That made it a tough, close fight, but I think I pulled it off in the championship rounds. I landed the most effective punches.”

Said Zepeda: "Jose Ramirez is a great fighter, and his fans really pushed him and gave him momentum."

As for what's next, Ramirez mentioned unification bouts or perhaps a move up to welterweight. When it was all said and done, the Central Valley folk hero sent his fans home happy. 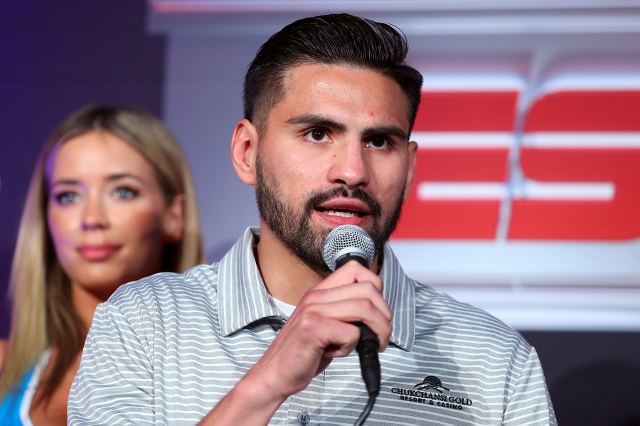 Heavyweight prospect Guido "The Gladiator" Vianello" improved to 2-0 with a first-round stoppage over Andrew Satterfield, scoring a knockdown early in the round and finishing it off with a vicious follow-up combination. Vianello represented his native Italy at the 2016 Rio Olympics.

Fresno native and super bantamweight prospect Isidro Ochoa improved to 7-0 with a fifth-round TKO over Jesus Guzman after Guzman's corner elected to stop the fight.

Keep in mind Ramirez suffered a nasty cut early in the fight from one if several headbutts. Tough to fight your best with blood in your eye. On another note the ref did his best in round 12 to save…

[QUOTE=Drigo;19503880]Jose Ramirez is overrated. Then they keep mentioning his name with Crawford...[/QUOTE]I agree with you! I think all the semi-finalists in the WBSS would beat Ramirez! I think Subriel Matias would give him problems too! I think Hooker would light…

Grandpa said ramirez will be polished in 2 or 3 years, so that is an honest assessment of where he thinks he is. What ramirez is, is a very strong, hardworking guy. Perseverance is a skill in itself because a…

Jose Ramirez is overrated. Then they keep mentioning his name with Crawford...

Chon won that fight. In my humble opinion...