Jose Ramirez: I Felt Very Confident in My Skills - Like a Great Fighter

The way he told it—and showed it—Jose Carlos Ramirez had never been more confident heading into a perceived pick-‘em matchup.

A Fight of the Year candidate emerged from Ramirez’s super lightweight title unification bout with Maurice Hooker, whom he stopped on his feet inside of six rounds Saturday evening in Arlington, Tx., just outside of Hooker’s Dallas hometown. Most in the industry remained torn on picking a winner right up until the opening bell.

For the eventual winner, it was all about sticking to the basics in producing the result he believed would always come to surface.

“[Head trainer] Robert [Garcia] told me, Maurice Hooker is a smart fighter he’s going to want to hit you,” Ramirez said during his DAZN post-fight interview of his biggest career win to date. “Just be comfortable. I was going back to my fundamentals like I did as an amateur, closing the gap coming in slowly.” 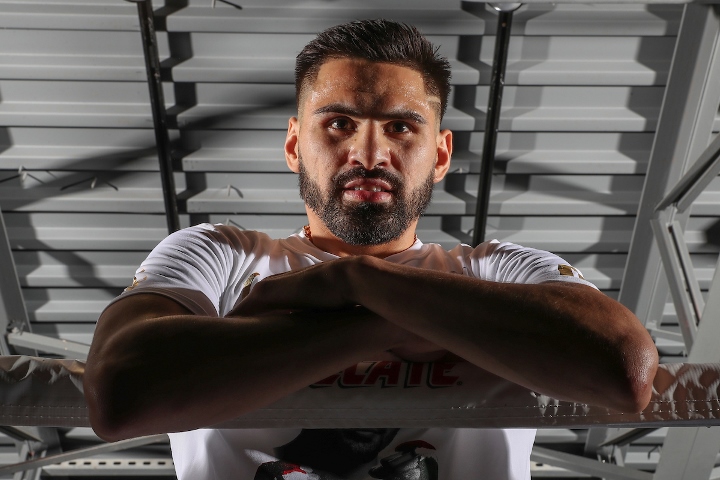 Ramirez (25-0, 17KOs) was credited with a knockdown in round one, which came about when he stepped on the left foot of Hooker (26-1-3, 17KOs) who stumbled to the canvas. Referee Mark Nelson missed the sequence, focused on the action upstairs and deemed a Ramirez jab as the cause for the fall.

“It wasn’t a knockdown” Ramirez humbly admitted afterward—though it would prove moot.

A back-and-forth affair suddenly flipped in round six when Hooker was rocked by an onrushing Ramirez. A barrage of punches along the ropes left the local favorite defenseless in forcing the stoppage.

“I worked on my jab, closing the distance. Once I was in range, I threw that 1-2 that has worked so brilliantly for. I landed that 1-2 and it pinned him along the ropes. I went in and stopped the fight.”

Lost in his offensive onslaught was the subtle defense provided to allow the fight to swing in favor of Ramirez, a huge draw in California’s Central Valley region.

“He landed some good shots but were on my forehand. I know he didn’t land his best right hand,” noted Ramirez, who makes the third defense of his title he claimed in a 12-round win over Amir Imam last March, in addition to adding a second belt. “He landed some right hands, but not the most powerful he’s landed.

“I felt very confident within my skills just as any great fighter feels coming into the ring. Any great champion is confident in themselves. Now I’m the unified champion of the world. I’m very humbled, a very blessed man.”

this was a way better fight then the crap showtime aired

The more time he spends in training camp under Robert Garcia the better he will get. This was a much improved performance over his last fight.

Ramirez' defense was always worlds above Saucedo and he's a real Jr welter, not an old blown up lightweight, like Flanagan. Ramirez better not sit on his laurels, according to everybody, the other two, Josh and Rougarou, are better than…