Jose Ramirez: Here To Fight Best Guys At 140, I Want Other Titles

Jose Carlos Ramirez knew his team had the right idea when opting to pass on entering him in the World Boxing Super Series super lightweight tournament.

The unbeaten titlist from California’s Central Valley—where he remains a massive draw—took his lumps in the court of public opinion but has since emerged as the class of the 140-pound division. That crowning moment came when he marched into the home region of fellow undefeated title claimant Maurice Hooker in scoring a 6th round stoppage in their DAZN-streamed unification bout Saturday evening at College Park Center in Arlington, Tx.

“I felt very confident within my skills just as any great fighter feels coming into the ring,” Ramirez (25-0, 17KOs) said post-fight of his biggest win as a pro to date. “Any great champion is confident in themselves. Now I’m the unified champion of the world. I’m very humbled, a very blessed man.” 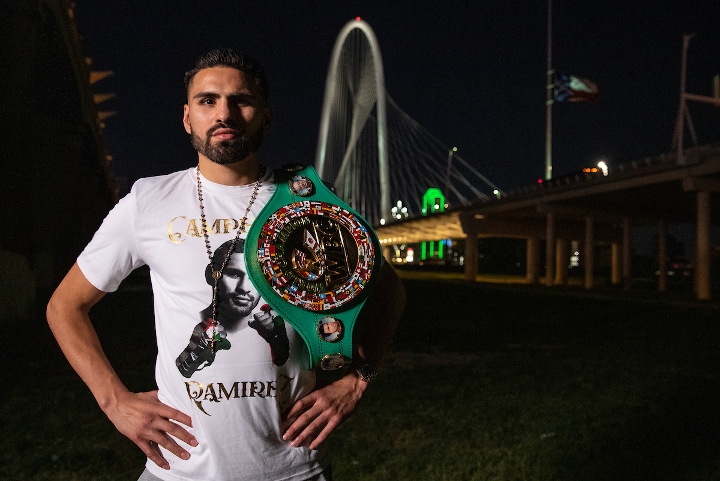 The win gave Ramirez his third successful title defense of a reign dating back to his 12-round win over Amir Imam last March. With the massive turnover atop the division, Ramirez entered the night as the longest-reigning of the four unbeaten super lightweight titlists including Hooker (now 26-1-3, 17KOs) along with Regis Prograis (24-0, 20KOs) and Josh Taylor (15-0, 12KOs), both of whom won their titles just this past spring.

He leaves the ring as the division’s leader, but not at all willing to merely sit on his lead.

“I’m here to fight the best guys at 140,” insists Ramirez, whose expert boxing manager Rick Mirigian has been engaged in a lengthy social media feud with Prograis and his team in hopes of building towards a super fight. “I want the other titles. That’s my main goal.”

The dream will have to wait until no earlier than the first quarter of 2020. Prograis and Taylor are awaiting an official date for their WBSS finals and title unification, which BoxingScene.com previously reported is being targeted for Oct. 5 in the United Kingdom.

If that’s the case, the division’s lone current unified titlist is more than happy to add another fight to his ledger and payday to his bank account in the interim.

“I don’t know if they have a date set for that fight; If they do, I would love to fight on ESPN (with whom he’s under contract through promoter Top Rank) one more time before the end of the year,” notes Ramirez.

[QUOTE=sammybee;19945140]Ramirez needs another fight before the year ends to wait to fight the winner of WBSS for a unification.[/QUOTE] He did say he has one more fight before years end on Espn Kind of ironic since he was on Dazn…

Was that Jose Rameriz?! Great to see the skill backed up with a little aggression. Or alot in that case. That was a great performance of determination. Up there in this years best five rounds catagory. Which I just created.

[QUOTE=Letmaku;19945553]Ramirez Broner is at 140.[/QUOTE] Yes, hope they make this fight happen. Will be great to see broner on his ass, and on his face preferably.

E[QUOTE=Boxing Goat;19945094]That was an awesome performance and I think that Ramirez would give anyone at 147 and down a [email protected] of a fight aside from maybe Spence.[/QUOTE] Yes after beating Broner!