NEW YORK – It wasn’t as spectacular or as quick as his last performance, but Jose Ramirez’s determination earned him a 140-pound world title Saturday night.

The 2012 Olympian remained undefeated and won the vacant WBC super lightweight title by beating up a game Amir Imam in The Theater at Madison Square Garden. Ramirez won what at times was a competitive 12-round fight by unanimous decision.

Stewart didn’t score a single round for Imam (21-2, 18 KOs), who appeared hurt at least three times during the fight.

“This is a dream come true for me,” Ramirez said. “It is an honor to be a world champion. I’m thankful for the talent God gave me. I dedicate this fight to all the immigrants. I fight for them.”

The 27-year-old Imam, an Albany, New York, native who’s rated No. 1 by the WBC, and the third-ranked Ramirez were ordered to fight for the WBC 140-pound championship Terence Crawford relinquished last year move up seven pounds, to the welterweight division.

Sensing Imam was about to go, Ramirez attacked him to start the 12th round. Ramirez seemed to hurt Imam with a barrage of rights and lefts, but Imam tied him up, managed to fight back during the second half of the 12th round and made it to the final bell. 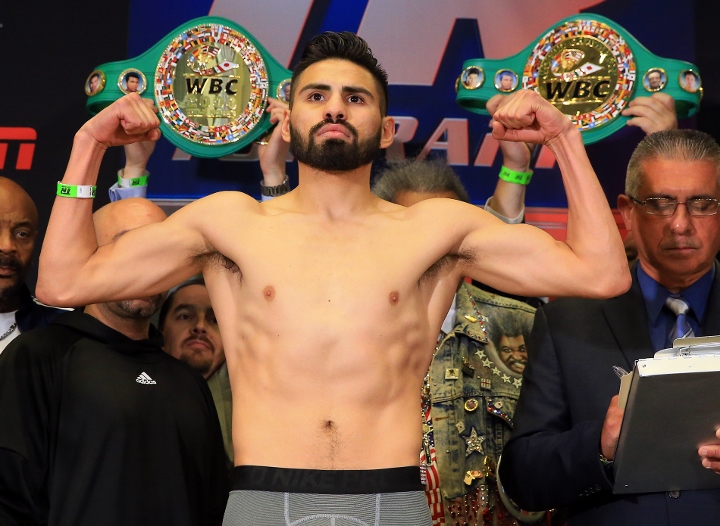 Ramirez hammered Imam with power shots that caused significant swelling under Imam’s right eye early in the 11th round. Ramirez dominated that round and snapped back Imam’s head with a straight right hand near a neutral corner, just before the 11th round ended.

“There was a point in the fight that I said to myself, ‘Jose, what are you doing?,’ ” Ramirez said. “That’s why I caught my second wind and I gave it my all in the championship rounds.”

Ramirez tried to bully Imam into the ropes at the start of the ninth round, but Imam stood his ground and moved the action back to the center of the ring. They fought inside for most of the rest of the round, with Imam and Ramirez each landing his fair share of head and body shots.

Imam seemed to get the better of a fierce exchange early in the eighth round. That slowed down Ramirez, but only temporarily.

Before the eighth round ended, they traded hard body shots.

Imam and Ramirez traded left hooks with just under a minute to go in the seventh round. Neither fighter appeared hurt by that exchange

Ramirez buzzed Imam with an overhand right at about the 1:50 mark of the sixth round. Imam helped temporarily and moved out of Ramirez’s punching range long enough to regain his composure.

Ramirez landed another overhand right later in the sixth, but it didn’t land as flush as the shot that hurt Imam.

In the first half of the fourth round, Ramirez began landing his overhand right regularly. Imam connected with a right uppercut that snapped back Ramirez’s head with about 50 seconds to go in the fourth.

Ramirez trapped Imam in his own corner at the very beginning of the second round and landed a hard left to the body. Imam attempted to work off his jab later in the second, but Ramirez connected with an overhand right as Imam moved toward the ropes.

Ramirez was aggressive in the first round, but Imam mostly was elusive in what amounted to a competitive three minutes.

Less than an hour later, Ramirez left the ring a world champion. Impressed with his opponent, Ramirez made sure to credit Imam for the toughness and courage he displayed during their fight.