Not even a two-week delay could prevent Jose Pedraza from missing a beat.

Judge Tim Cheatham ruled the bout a shutout at 100-88, while judges Patricia Morse Jarman and Dave Moretti each scored the contest 99-89 in favor of Pedraza, who scored two knockdowns in their ESPN-televised main event.

Both boxers were expecting this fight to have taken place two weeks ago and at the true junior welterweight limit. Those plans were scorched after LesPierre’s manager, Jose Taveras tested positive for COVID-19 which expelled the entire team from the secured “Bubble” area on the morning of their eventually canceled fight.

An open slot provided a second chance opportunity for both, who agreed to the rescheduled date at a 144-pound catchweight. The request came from LesPierre, but mattered little to Pedraza who was already fighting for so much more as he performed in honor of his grandmother who passed away earlier this week.

“You can’t have an off night in boxing,” Pedraza told ESPN’s Bernardo Osuna after the contest. “I came in tonight physically fit, mentally fit and just ready.”

It showed right out the gate, as Pedraza came out fighting at a frenetic pace in the opening round. The former 130- and 135-pound titlist found his power game in a hurry, connecting with a left uppercut midway through the round. LesPierre—whose prior lone loss came in a failed title bid versus then-unbeaten 140-pound titlist Maurice Hooker—was effective when able to get off his jab and left hand, although the Brooklyn-based southpaw admitted to have been hurt by a body shot during the frame.

Pedraza went on the attack in round two, a frame where he scored on 46 of 83 punches thrown at a 58% clip.  LesPierre was in danger of referee Kenny Bayless pulling the plug on the fight, as he threw up the earmuff defense and laid along the ropes while Pedraza unloaded with power shots with little coming back for more than a minute.

Joan Guzman, the former multi-division champion and now LesPierre’s head trainer told his charge he needed to show him something heading into round three. The advice didn’t quite take, though not for a lack of trying. Pedraza was just too talented and too superior in skill for the former title challenger to solve.

LesPierre turned the tide in round five, scoring the bout’s first knockdown. It came courtesy of a left hand to the midsection, catching Pedraza off balance—partially caused by his left foot tripping over LesPierre’s right foot—and sending him to the canvas. The moment was short-lived, as Pedraza immediately returned the favor. A right hand shot clipped LesPierre, sending him to the deck seconds later.

Replays in between rounds negated Pedraza’s trip to the canvas, ruling it just that—determining that their feet getting tangled caused the knockdown more so than the punch thrown. The sequence ran well over the allotted one-minute period in between rounds, delaying the start of what was a largely uneventful round six as the extended break proving disruptive to the rhythm of both fighters. 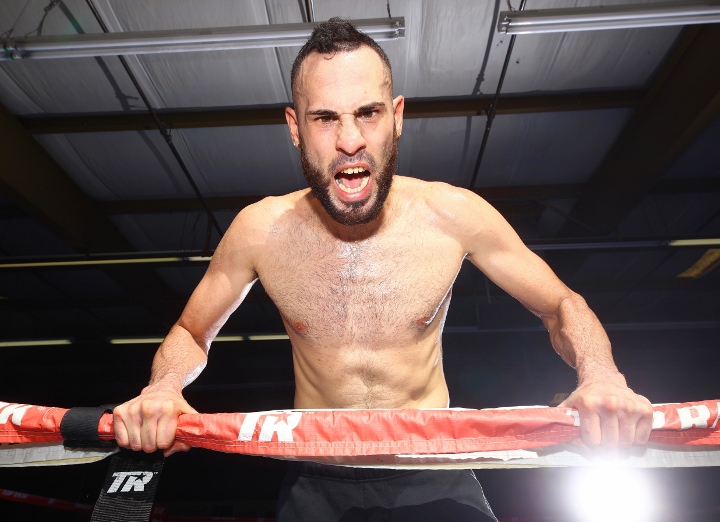 The furious start by Pedraza took its toll in the later rounds. His activity level slowed, although he stayed true to his “Sniper” nickname in still landing at well above a 40% clip. LesPierre sought to press the action, coming forward and shooting his right jab.Pedraza almost always had an answer, firing off counter right hands to shut down LesPierre’s offense.

LesPierre worked his jab in round nine, while fighting through a cut just outside his right eye. Pedraza continued to discourage the former title challenger with counter right hands, remaining a step ahead during every exchange.

With the fight well in the bag to that point, Pedraza sought to close the show in the 10th and final round. LesPierre was floored for the second time on the night, decked by a quick jab less than a minute into the frame. The former title challenger beat the count but bore the look of a defeated fighter. Pedraza moved in to finish what he started but instead settled for a dominant round and performance.

It’s the opposite direction for Pedraza, who wins for the first time since last May as he improves to 27-3 (13KOs). The victory is his first as a junior welterweight, coming on his second try as he dropped a 10-round decision to former two-time title challenger Jose Zepeda last September.

Thursday’s win was at least two months in the making. Pedraza was due to return on a May 9 show to have been headlined by undefeated and unified junior welterweight titlist Jose Ramirez, only for the event to have been canceled due to the ongoing coronavirus pandemic. Then came the postponement of their previously scheduled June 18 date before arriving to this point.

Now, it’s onto the future—and the 31-year old Boricua has every intention of swinging for the fences.

“I moved up in weight to become a three-division world champion,” Pedraza told BoxingScene.com. “I’ll take on either one—there are only two (Jose Ramirez and Josh Taylor) and both are high quality champions.

“I’m a former two-division champion but now I’m a challenger and would love to fight either champion.”