June 10, 2017 should have been the best night of Jose Haro’s professional boxing career.

The result was what he wanted at the WinnaVegas Casino Resort in Sloan, Iowa, an eighth round knockout of highly-regarded Daniel Franco that earned him the USBA featherweight title in a nationally-televised bout destined to take the now 14-1-1 Haro to the next level.

And he knew it, at least for a few minutes.

“Once I won the fight, I was like, this is it,” said Haro. “There were fights before when I thought the doors were gonna open up for me, but after I beat Franco, oh for sure. It was TV exposure, I just won the IBF-USBA title, I'm definitely gonna get bigger paydays, better fights, let's go.”

Those good feelings, the idea that finally, boxing was going to be fair, disappeared as soon as Haro found out that Franco was in a coma. For two weeks, the man Haro defeated stayed there until he finally began to emerge. There would be multiple surgeries, no more boxing, and a life altered forever. But thankfully, Franco survived and is living the best life he can without the sport that was going to take him to heights most could only dream of.

Haro wanted to reach those heights. He had a wife and five kids at home, and what better way to take care of them than by winning a world championship, getting the paydays that come with it, and putting his day job to the side forever. A couple more years of sacrifice, and the featherweight from Utah could walk away and enjoy retirement. But no one was lining up to fight Jose Haro after what happened in Iowa. Too much risk, too little reward. Too much of a stigma attached to a young man who almost killed his opponent in the ring.

There was serious talk of Haro fighting Lee Selby for the IBF featherweight title in late 2017, but that fight never happened. And after a rollercoaster of emotions, Haro realized that maybe luck just wasn’t on his side.

“Unfortunately, once I heard about the coma situation (with Franco), I was having doubts,” he said. “Once he started to get better, my confidence was building back up that big opportunities were gonna come my way. But after Selby's people decided to go a different route, that's when reality started hitting me in the face. It was not meant to be. It's not gonna happen. So I just took it on the chin. It's just part of life. I can't really dwell on it because if I do, I'm just gonna keep getting upset and angry.”

“A lot of the fights I had lined up were getting postponed or canceled for some reason,” he said. “I had to deal with that for almost a whole year. I was also dealing with shoulder injuries, and then my wife started nursing school, so I decided to take a break. I was sick of the politics in boxing. My main focus was, I just gotta heal, and if I come back, I want to come back healthy. I also needed to start spending more time with my family, I needed to show my wife support and support her through her school.” 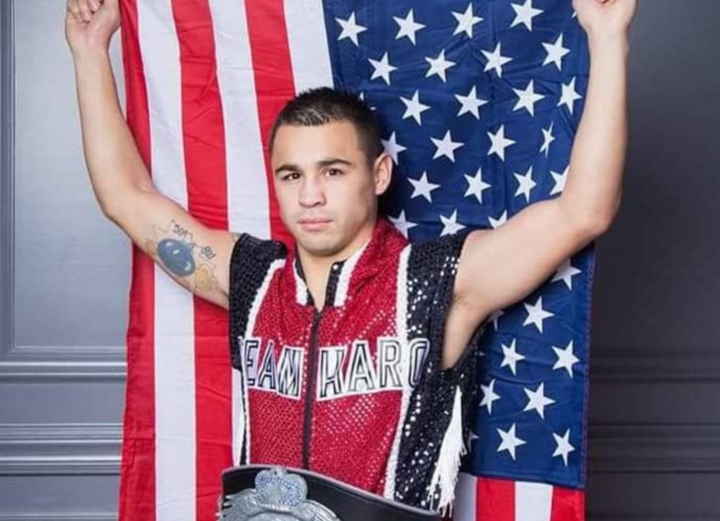 There would be another baby arriving in the Haro household, a boy, making it three girls and three boys. And as his wife went through nursing school, Haro lived civilian life, far from the boxing gym.

“I just needed a break from boxing,” he said. “I didn't even want to be near the gym, nothing. I was sick of it. I've been doing this since I was 12.”

At the end of 2018, though, he admits that the itch kicked in. Early in 2019, he reached out to the Sheer Sports management team and told him that he wanted back in.

In February, Utah’s Haro made the trip to the Big Punch Arena in Tijuana, decisioning Genaro Velarde Rodriguez in his first fight in nearly three years. It was quite the experience.

“I would never probably want to fight in Tijuana again,” he laughs. “It was something I never experienced before. The fighter I was supposed to fight was a different guy and when we were getting ready in the dressing room, my opponent was in the same dressing room I was. So when I was getting my hands wrapped up, he was getting his hands wrapped and we were right next to each other. I felt like it was my first fight ever.”

“I'm glad I went and experienced it, but it was weird.”

It should be a lot better for the 33-year-old when he travels to Los Angeles for an IBF international featherweight title fight against Mark Magsayo on September 23. Airing on FOX Sports 1, it’s the kind of fight that will immediately put Haro back on the map should he hand the Filipino prospect his first pro defeat.

“I'm excited,” said Haro. “Coming into boxing, I feel like every professional fighter's number one goal is to become world champion. That's my goal. When I heard about this fight, I said yes right away because I know what's at stake. I'm obviously gonna give it my all and hopefully come out victorious and add another story to my book.”

It’s going to be some book. The Haros will welcome a seventh child, a girl, into the world this November, and dad will have plenty of stories to tell her about his time in the ring, even if his older children don’t understand why he continues to fight.

“My kids don't want me to fight no more,” he said. “They tell me all the time, ‘I don't understand why you gotta fight, dad. You don't need to prove anything.’”

He knows that. He also has that something in his chest that all fighters do, that hope that when it’s just him and his opponent between the ropes, he can control his own destiny and it can take him to where he wants to go. The kids won’t understand that. Most people who don’t fight won’t understand it, either. But Jose Haro gets it, and that’s all that matters. As for September 23, he’s showing up to win. What happens after that, nobody knows, but he’s already accepted that.

“I feel like I've been at the short end of the stick with boxing, so I don't really expect much from boxing,” he said. “If I win, I'm gonna be grateful and happy. If it doesn't go my way, I'll still be grateful. I'll be like, you know what? I had a great career. It didn't go my way, but at least I'm walking away from the sport with my health and I can just enjoy life.”