Jose Benavidez's Leg Will Be 80% At Best, Father Says

José Benavidez Jr. had to pull out of his August fight against Luis Collazo after suffering a left leg injury.

In August 2016, Benavidez Jr. was shot in the right leg, just above the knee and the bullet hit a main artery. He also suffered a wound to his left leg, and the injuries sustained from that near-fatal night will linger for the rest of his life. Whenever Benavidez Jr. steps in the ring, he’ll forever do so with a physical disadvantage, according to his father.

“He injured his leg a little bit [before the scheduled Collazo fight], and if something is wrong already, I’m not going to take a chance. I have to make sure he’s fully healthy before he’s ready to go again,” father and trainer José Benavidez Sr. told BoxingScene.com. “I don’t think he’s 100 percent. He’ll never be 100 percent recovered. If we can get to at least 80 percent, that will be good and I will be happy with that. When he fought Terence Crawford, his leg was 60-to-70 percent.” 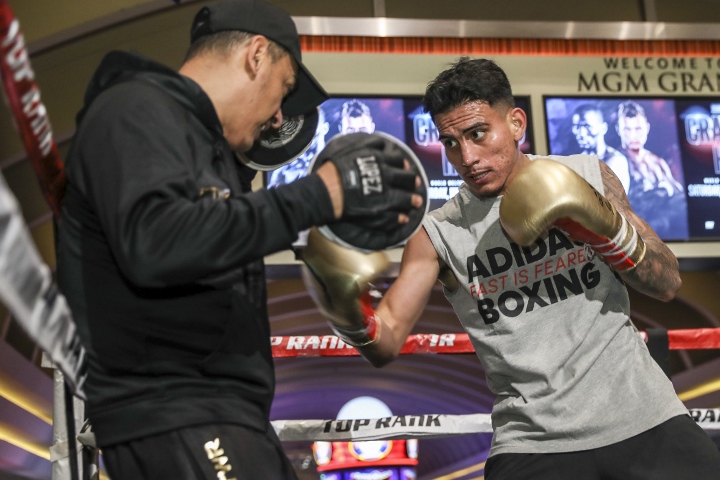 Benavidez Jr. (27-1, 18 KOs) is looking to recover again soon and bounce back after a TKO loss to Crawford in October 2018. Benavidez Jr. already lost 18 months from the prime of his career before facing Crawford, and he’s on the sidelines again in an extended layoff.

His father is hoping he steps back in the ring by February. Jose Sr. first wants to finish training his son David Benavidez for his Sept. 28 fights against Anthony Dirrell before switching gears to his other child.

“I was nervous in the Crawford fight because I didn’t know how the leg would react,” said Benavidez Sr. “But I think he did better than what I thought. He showed me has heart. It’s just now getting him to focus.”

The focus senior alludes to is junior being arrested in July on street racing charges in Arizona, just days after suffering the leg injury that postponed the Collazo fight.

“That’s something that I can’t control,” said Benavidez Sr. “I do the best that I can to guide him and tell him what to do.”

Have you met him personally? I met him at 15 and til this day think he’s a good dude. You don’t have the fame he does nor the envious people everywhere you go so you can’t relate to him under…

I hope this thug POS gets totally annihilated in this next fight. He's one of those people that when you come across him for the first time, you think dang this dude is a real POS and from that point…

[QUOTE=Boxing lives;20076482]Crawford beat the brakes off this thug[/QUOTE] Crawford gets 60-70 percent credit for the win

[QUOTE=Slyboots;20076479]Anyone know the circumstances leading to the shooting? Benavidez strikes me as a street punk type, so it wouldn't surprise me if he provoked the attack being his typical self.[/QUOTE] From what was reported, he was just waking his two…

Benavidez is a pretty good fighter I think he did pretty good against Crawford all things considered. He definitely did better than most of Buds past opponents. I thought Bud woulda had him outta there in 6 or less but…

ADD COMMENT VIEW COMMENTS (9)
Advertisement
Top Headlines Memo Heredia Has High Hopes For Robeisy Ramirez Bob Arum: We Think Ajagba Can Be Among Top Heavyweights In The World Ennis: Extra Weight Won’t Matter For Abreu; I'll Go In There & Get The Stoppage Pedraza: As I Keep Moving Forward, Fights Will Keep Getting Tougher And Tougher Alex Saucedo vs. Arnold Barboza Jr. To Co-Headline Lomachenko-Lopez On 10/17 Erickson Lubin: You Could See How Much I've Changed Since The Charlo Fight Jaron Ennis: I Might Have To Get Into A Mandatory Position To Get A Title Shot Ajagba: Time Away From Ring Was Frustrating, Hurts To Not Be Able To Do Something You Love Nyambayar: I Had A Sprained Ankle Against Gary Russell; I'd Love A Rematch Lubin: I'm Fresher, Hungrier Than Lara & Trout; Looking To Make Statement Against Gausha Pedraza: I Think Lomachenko Will Dominate Lopez, But He Can't Get Reckless Daily Bread Mailbag: Charlo Brothers, Ennis, Canelo, Spinks, More BoxingScene.com's Television Pick of The Week - September 19 McKenna: Beating Ohara Davies Will Be Highlight of My Career Joe Joyce: We'll See if Dubois Can Take My Heavy, Powerful Shots! Frank Warren: Whyte Received Shorter Medical Suspension Than Spelman? Francis Chua Aims To Fight, Looks To Kambosos, NG, MacKenzie Boxing Facing Financial Adjustments Johnny Nelson Confident Whyte Would Have Benefited With Tibbs in Corner Vijender Singh Hopes To Resume Career Before Year is Over Josh Taylor Must Remain Focused on Khongsong, Says Ben Davison Javier Molina: Pedraza Looked Good With LesPierre - I'm No LesPierre! Amir Khan Appointed as President of WBC Middle East Boxing Council Ajagba vs. Rice, Ramirez vs. Caraballo - Ready To Fight Jose Pedraza, Javier Molina - Set For Showdown in Las Vegas Pedraza-Molina ESPN+ Weigh-In Report From The Bubble Ennis vs. Abreu, Nyambayar vs. Breedy - Set For Bouts Erickson Lubin, Terrell Gausha - Ready For WBC Eliminator Haven Brady Jr. Inks Promotional With Top Rank Crawford vs. Brook Negotiations at Advanced Stage For November 14 Zhang Zhilei Inks Promotional Pact With Eddie Hearn Juan Carlos Abreu Comes In 3-Plus Pounds Overweight For Jaron Ennis Fight Rene Tellez-Giron Return Pushed Back Due To COVID-19 Terrell Gausha: I Was Nervous That I Wouldn't Get This Fight Again Teofimo Lopez: Lomachenko Is On His Way Out, I'm Looking Through Him Jermell Charlo: I Don't Want Judges To Make Decision For Me Against Rosario Hearn on Yarde-Buatsi: It's a Massive Box Office Fight at The O2 Abreu: Either Jaron Ennis Knocks Me Out Or I Will Knock Him Out Bilal Fawaz Inks Agreement With MTK Global Lewis Ritson Vows To Fight His Way To a WBA Title Shot
Advertisement
Latest Boxing Videos 'The Journey - Charlo Doubleheader' 30 Minute Special Showtime Releases Trailer For Documentary 'Ringside' Charles Martin Reacts To Helenius Stopping Kownacki Robert Helenius Reacts To Shocking TKO of Kownacki Adam Kownacki Reacts To TKO Defeat To Helenius Joseph Parker Reflects on Fury-Wilder, Talks Return Mikey Garcia Reflects on Fury-Wilder, Talks Vargas Eddie Hearn Reflects on Fury Stopping Wilder, More Kenny Porter Reacts To Tyson Fury Stopping Wilder Jose Ramirez Reacts To Tyson Fury Stopping Wilder
Recent Top Stories Graveyard Shifts At Warehouse Motivated Molina To Turn Around Boxing Career Erickson Lubin vs. Terrell Gausha: The Play-In Derevyanchenko Vows: I'm Ready For Everything in Charlo Fight Remembering "The Showdown" – Still a Thrill After 39 Years
Advertisement
Latest Forum Threads
Advertisement
Advertisement
This website may contain adult language.
TM & © 2020 BoxingScene. All Rights Reserved.