Jose Benavidez: All Terence Crawford Does Is Run And Switch

OMAHA, Nebraska – Terence Crawford’s versatility, ability to make adjustments and ring IQ have been lauded throughout his ascent toward the top of pound-for-pound lists.

Jose Benavidez Jr. and his father/trainer, Jose Sr., still consider Crawford the benefactor of masterful matchmaking more than anything. They think he has fought the right opponents, at the right times, and exploited those opportunities on his way to winning world titles in three weight classes.

They concede Crawford “works hard,” yet little else in advance of their 12-round fight for Crawford’s WBO welterweight title Saturday night at CHI Health Center (ESPN; 10:30 p.m. ET/7:30 p.m. PT). 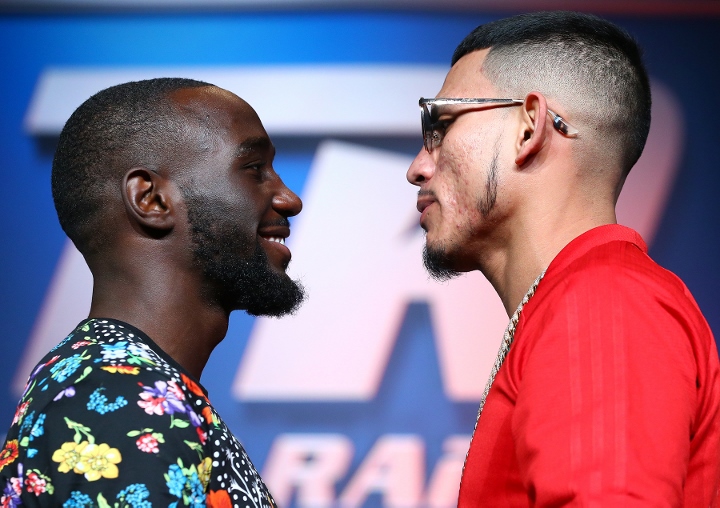 The younger Benavidez believes he is the best opponent Crawford has agreed to fight.

At 6-feet, the Phoenix native stands four inches taller than the heavily favored Crawford (33-0, 24 KOs), who often fights from a southpaw stance. Benavidez views his strength an advantage that’ll become evident early in their bout as well.

“I feel like Crawford’s finally fighting someone that can defend himself,” Benavidez Jr. said. “When he fought [Viktor] Postol, I sparred Postol, beat the sh*t out of him in four rounds. When I sparred [Ray] Beltran, you don’t even wanna know what I do to Beltran. So, I mean, these guys that he’s fighting, he’s fighting smaller guys. And he’s going the distance with them, so I mean, he’s gonna have a tough night on Saturday.”

The 26-year-old Benavidez Jr. (27-0, 18 KOs) feels he has improved, particularly in learning how to fight through the pain the Phoenix native must manage in his right leg after suffering a gunshot wound near his knee during an unsolved shooting in August 2016.

“He’s the same fighter he was three years ago,” Benavidez Jr. said. “I don’t see any improvement.”

“He doesn’t have good uppercuts. What he has is good legs. He goes left, right, backs up. That he does have. He just moves, moves, moves, moves. So I’ve been studying how to neutralize that, not just chasing him, you know? That’s the only thing that I will give him – good legs, that’s it.”

[QUOTE=Doctor_Tenma;19190751]I cant remember the last time the fighter who complained about his opponent being a runner winning the fight.[/QUOTE] I would have won if my opponent stayed still and allowed me to land punches on their face.

[QUOTE=Doctor_Tenma;19190751]I cant remember the last time the fighter who complained about his opponent being a runner winning the fight.[/QUOTE] Yup! How that work out for GGG??? He got his wish.

[QUOTE=Doctor_Tenma;19190751]I cant remember the last time the fighter who complained about his opponent being a runner winning the fight.[/QUOTE] That's because they don't have the skills to make the so called runner not use movement which means all he is…