Jorge Linares: Ryan Garcia Has Talent, But He’s Not Ready For A Big Fight Now

Jorge Linares doubts Ryan Garcia is ready to fight someone like him.

Linares has noticed Garcia has plenty of speed and confidence, but the former WBA/WBC lightweight champion doesn’t think the undefeated, 21-year-old contender has truly proven anything. The experienced Linares wants to see what happens when a powerful, polished opponent hits Garcia on the chin.

“He likes talking too much,” Linares said during a recent appearance on “The Ak & Barak Show,” which streams daily on SiriusXM and DAZN. “He is 21 right now, right? Remember when I was 21, I was fighting with Oscar “Chololo” Larios [at] Mandalay Bay [in Las Vegas]. But he has talent. I like that. I respect that. But he has talent. He’s a good boxer, yeah. But now, he’s not ready to get a big fight. But he likes to talk.” 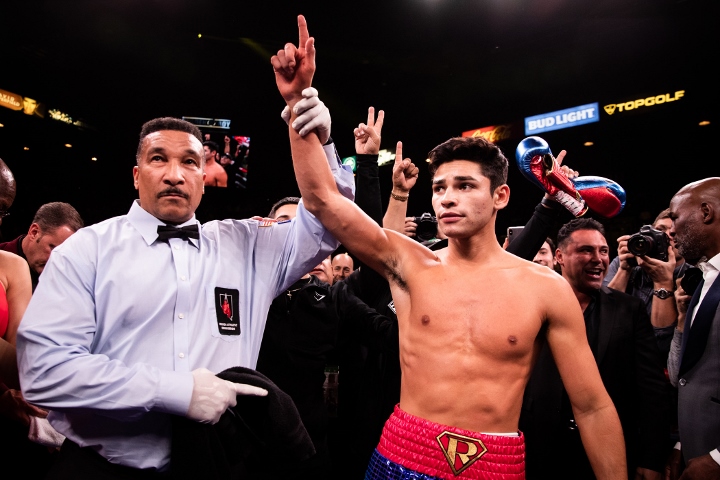 Before the COVID-19 pandemic interrupted the boxing business, their handlers at Golden Boy Promotions were preparing to put together a Garcia-Linares fight for July 11 at Staples Center in Los Angeles. Garcia still could fight in July, perhaps as early as July 4, but not against Linares.

The 34-year-old Linares is in Japan, unable to train and spar due to that country’s lockdown restrictions. Linares (47-5, 29 KOs) said he would need a 10-week training camp for a fight against Garcia (20-0, 17 KOs), thus that bout won’t be next for the Venezuelan veteran.

Linares is absolutely sure, though, that he’d beat Garcia if they ever fight. The three-weight world champion rated Garcia “a six or seven” on a scale of one to 10.

“He’s a good boxer, but he needs time,” Linares said. “He needs time, especially with this situation because they [aren’t] training right now.”

Linares feels fans are underestimating him in a potential fight against Garcia because each of his five defeats have come by technical knockout. He suffered two of those losses in the first round and another in the second round.

“He has speed,” Linares said. “He’s very fast. But power, I don’t think so, because I was training with him a couple years ago. And what about here [points to his chin]? Every people talking too much about myself, right? ‘Oh, Jorge Linares don’t have chin. Blah, blah, blah.’ But if you can see my fights, when I lost five times, I lost because the punches come here [on the side of his head], not on the chin.

“You know what I’m saying? It’s totally different, my boxing. But the people are talking too much. You know? But we need to see one day Ryan Garcia fighting with a good boxer, and we can see how much he can [take a] big punch, a good combination. He’s not like Edwin Valero. You know what I mean?”

Garcia is very confident following back-to-back, first-round knockouts of Romero Duno (22-2, 17 KOs) and Francisco Fonseca (25-3-2, 19 KOs). Linares suspects that Garcia’s handlers aren’t as eager to put them in the ring together.

“It’s easy to see [Garcia’s confidence] because he’s young and because he win all of the fights in the first round, the easy fights,” Linares said. “You know what I’m saying? But he don’t fight with any good one boxer. You know? So, when the boxers fighting with him, everyone don’t wanna fight with him. But me, I want the fight with him. I don’t wanna [run]. I don’t need to [run]. He’s fast, yes, but … he likes talking too much. But his team know very well they don’t want [the fight]. He don’t need this fight with me.”

What does this bum care what someone else is ready for? You are a bum, Mr Linares, so make as much money as you can, while you can. Fight the hypejob kid. Garcia is also a bad KO waiting to…

[QUOTE=MulaKO;20597090]Won’t do your homework for you but now he won’t even be fighting on the 4th You figure it out when and where Smfh[/QUOTE] .!.. keep your bull sht to yourself. [url]https://www.boxingscene.com/ryan-garcia-theyre-gonna-say-linares-old-no-chin-i-catch-him--149321[/url] Ryan just proved again is the oe who…

[QUOTE=Ajvar;20596971]Can you show me when and where exactly?[/QUOTE] Won’t do your homework for you but now he won’t even be fighting on the 4th You figure it out when and where Smfh

[QUOTE=MulaKO;20589569]Garcia is the one who has called the fight off[/QUOTE] Can you show me when and where exactly?