The veteran referee acted on the wishes of LaManna’s corner men, though, who had seen LaManna take too much punishment in his scheduled 10-round fight against Mexican veteran Jorge Cota. The game LaManna remained on his feet for four-plus rounds, but he didn’t have enough on his punches to keep Cota from pressuring him and landing flush punches.

A number of those shots, including two uppercuts in the fifth round, snapped back LaManna’s head. Rosato stepped between them to stop the fight 1:22 into the fifth round of a fight FS1 televised as part of the Julian Williams-Jeison Rosario undercard at Temple University’s Liacouras Center. 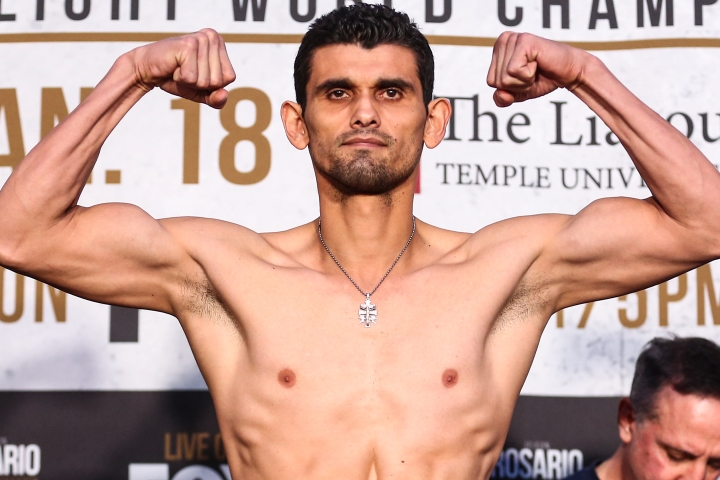 LaManna (28-3-1, 10 KOs), of Millville, New Jersey, lost by technical knockout for the second time in his nine-year pro career. The 32-year-old Cota, of Los Mochis, Mexico, improved to 30-4 and recorded his 27th knockout.

Cota has been knocked out by Jermell Charlo, Erickson Lubin and Marco Antonio Rubio, but he was a step up in competition from anyone LaManna had fought since Dusty Hernandez Harrison beat him in a very competitive, 10-round welterweight fight in September 2016. LaManna’s first loss was a sixth-round stoppage against Antoine Douglas in a middleweight fight in March 2015.

Cota landed with ease on LaManna in the first half of the fifth round. He snapped back LaManna’s head with a left uppercut and then a right uppercut.

Soon thereafter, Rosato stepped between them to stop the fight.

Cota pressured LaManna throughout the fourth round and landed to his head and body. LaManna did his best to fend off the aggressive veteran, but he couldn’t stop him from coming forward.

A short, straight right hand by LaManna landed with just under a minute to go in the fourth.

LaManna implored Cota to come forward and hit him at about the midway mark of the third round. About 20 seconds later, LaManna landed a straight right that made Cota re-set his feet.

LaManna landed two right hands within the first minute of the second round, but he didn’t hurt Cota. Later in the second, Cota backed LaManna into the ropes and landed while fighting out of a southpaw stance.

LaManna came back to his corner after the first round bleeding from his mouth and with swelling around his right eye.

Cota’s hard right hand caught LaManna flush with about 45 seconds to go in the opening round.

Cota backed LaManna into the ropes about a minute into the fight and the traded head and body shots. A right uppercut by Cota connected during that exchange.

What's the story with the Cornflake name haha anyone know? Does he eat them for the reason they were marketed originally, to keep you from Tyson Furying yourself 7 times a day?

Cornflake is game but just doesn't have the god given tools to take it to another level.

i didnt know i could catch this on FS1 til well after the fight ended. dam man. lamannamismoften in good fights and is a hard-workin dude.